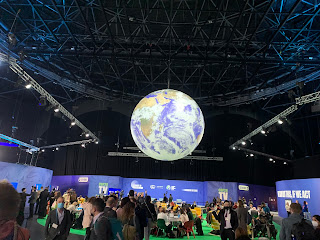 These first two days are called the “World Leaders Summit” and all the heads of state (except for China, Russia, Turkey, being the most significant),  have convened to make speeches about what a crisis we are in and how committed they are to doing something at some point in the future. Very depressing, regardless of how elevated the rhetoric may be. After 26 years of un-kept promises and very little progress, close observers are rather jaded.

One the refrains could be summarized as “show me the money!” Many promises have been made in the past about what is called “Loss and Damage” in poor countries which results from more frequent storms, fires, droughts, etc. resulting from climate change (+ poverty) with not nearly enough funds flowing to meet the need.

Another issue has to do with access to the decision-making processes by women and youth. The ACT Alliance of Churches is determined to raise awareness of how these two groups are suffering the most, around the world (aside from other creatures) and that any solution to this crisis must be one that takes their perspectives into account by providing them a seat at the decision-making tables both here at COP 26 and back in their own home countries.

The third area of special concern of the ACT Alliance is the system of financing of the changes needed to lower CO2 and other greenhouse gasses in poor countries. The transition from fossil fuel to renewables is costly and cannot be borne by the poorest of the countries. There are not enough pledges to meet the 100 Billion USD yearly of the Paris agreement (and the start has been postponed to 2023). Compare this with numbers that have been immediately available to fight the outcome from the corona Crisis (Germany estimates 150 Billion for supporting businesses only ).

A phrase we are hearing a lot this week is “Climate Justice”. This is the idea that since the cause of our climate situation is in the rich nations, they must bear the cost of fixing the problem. In the meantime, the poorest nations are suffering the most devastating consequences and must be assisted with mitigating these damages.

So while there are a lot of speeches being made, there seems to be very few details and the ones that are offered seem to fall far short of the mark needed to save us from ourselves.

I met up with Bill Somplasky-Jarman. Bill has attended many COP’s so he is serving as a mentor to me in this setting. We made our way to the section of the building housing the pavilions sponsored by the different countries. Each of these areas are of substantial size sufficient to offer events and speakers on a variety of topic throughout the day. The variety and number of these very interesting events is staggering and impossible to take in. 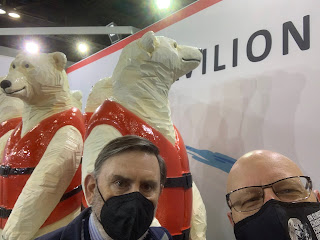 One of the more interesting displays, though small by comparison, was that of the small Pacific island of Tuvalu that is threatened by rising sea level , of being un-inhabitable within a very short time. They tied their plight to that of the melting ice caps of the north and south poles with a dramatic display utilizing polar bears and penguins. (see photos) 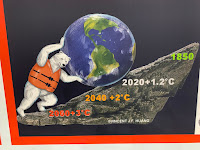 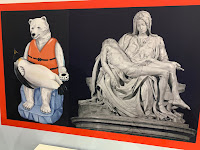 The Glasgow Churches Together organization has taken over the Salvation Army building just a 10 minutes walk from the “Armadillo” building (see photo) where the COP meetings are being held.

They have, in turn, coordinated use of the kitchen there with an organization called Nourish Scotland, that is seeking to combat climate change through a focus on food and agriculture. They offered a free lunch served in “tapas” style made of food that would ordinarily have been taken to a dump or compost pile. It was all delicious! I also ate some delicious icecream made by Martin Kirkland of the group Fair share from milk dairy as well as a vegan pumpkin icecream made with coconut milk!

I spoke with a representative, Sofie Quist,  sofie@nourishscotland.org.Uk from Denmark about the Glasgow Food and Climate Declaration www.glasgowdeclaration.org

which has been her primary project while on their staff.

Also present were Rui Lopez, Emma Kosovo and Phil Housley, (co-founder) of a

I met voluneers Ruth and Peter Musgrave, former missionaries in Bangladesh, who now live in London and had come to give a workshop about their own experiences of how climate change is affecting that country.

I had a very good conversation with Katy Brennan of the research organization systemiq.earth supporting re-generative agriculture projects in Africa and around the globe as a means of sequestering CO2 and reducing greenhouse gasses through different agricultural processes.

On Tuesday evening,  I attended the ACT Alliance debriefing in which we celebrated the announcements by a group of over 100 nations to dramatically reduce methane over the next few years.

Also the commitment by another group of nations to limit deforestation. While Brazil joined this commitment, one Brazilian levied the charge of “Green washing” against her president who she says will quite likely not up-hold his promise on this score.

We discussed the on-going struggles to achieve access for constituency groups to monitor the negotiating teams’ work. The result of the rules around covid is that only one person from each delegation is allowed to be in the room. This means that those who are already under-represented are doubly denied a seat at the table. 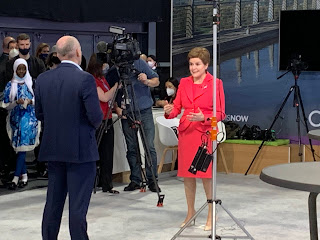 Following the ACT debriefing, I attended the

Faith Webinar: “COP26, Fossil Fuel Divestment and a Just Transition for All”sponsored by the Catholic organization Laudato Si. You can view the entire program on Youtube at:

Faith Webinar: COP26, Fossil Fuel Divestment and a Just Transition for All - YouTube

Speaking on the Catholic Church of Scotland’s decision to divest of all fossil fuel industries.

They had been told that “there are some ‘good’ oil companies”

Another argument was that the investments would not produce as much income as with fossil fuel industries.

Another was that it is hypocritical to continue using fossil fuels while disinvesting.

Finally overcame all the arguments.

All eight bishops in Scotland came, finally to a consensus to divest.

Along with dis-investing, they decided to make positive investments in a conscientious way.

Founder of the Green Anglican organization and now the environmental coordinator for the Anglican diocese of South Africa.

Speaking about the Anglican Bishops of southern Africa calling for an end to fossil fuel exploration in the South of Africa.

Dangers of pollution to water and other problems.

Mozambique has one million displaced persons due to the discovery and exploitation of a huge gas field.

Told of how the poor along the coast were pushed inland away from their traditional means of sustenance from the sea and the oil wealth created a new coastal wealthy class and destabilized the society.

Stand in solidarity with those on the climate change front line

Speed up the shift to renewable energy

Net zero is not the same as “zero emissions”

This is Africa’s Kiros moment.

Committed to disinvestment and invest from fossil fuels

Speak up for creation and a different way of life

In today’s investment world, exploration and development is beginning to be a very competive choice.

Anglican Diocese of Nampula Of Mozambique

Joined the call for a moratorium on fossil fuel exploration and exploitation in Southern Africa. Spoke eloquently about the harms his own country is experiencing from drought caused by climate change.

Gunela Hahn A Church of Sweden investment officer spoke about the

Investment strategy of the Church of Sweden

Between 5% and %20 of global GDP cost of climate change

Began in 2008 investing in the Al Gore fund which has always performed well.

Oil and Gas sector of the global economy

Require monitoring of the carbon emissions of companies in which they invest.

Offer three funds for the CoS 800 parishes.

Faith community has 520 commitments from groups

Larger than the GDP of U.S. and China combined

Europes largest pension fund in the Netherlands has announced decision to divest within the next year and a half.

Its critical that the next steps of pressure on all companies to reduce their carbon footprint.

Presbyterian Churches of Wales and Northern Ireland along with others

The vast majority of U.K. churches have divested

During the question time:

The fact that the richest nations are responsible for the predominate portion of environmental impacts yet the poorest persons and nations suffer the largest amount of the consequences.

Rachal Marsh spoke about the strategy of shareholder activism  in which the bulk of the funds are withdrawn while keeping enough shares to allow your organization to have a voice in the public company’s AGM.

Gunnela Hahn answered a Question about the pace of change in carbon reductions based on GDP differentials between countries, i.e., that less developed countries would be granted longer to reduce emmissions.

She also responded to question about environmental impacts of lithium mining. She said we Should not solve one problem by creating new ones.

Richard Brooks answered question about “Why does it take so long to divest? He said it has to do to some degree with the type of investment. Sometimes there is a penalty to be paid financially if you pull funds out before the requisite 5 or sometimes 10 year original commitment. However will is also a factor. When the will is present to divest, it can be achieved rather quickly.

Posted by PresbyEarthCare Coordinator at 12:35 PM