With insight, interpretation and inspiration, keynoter Rev. Dr. William Brown skillfully brought to life the theme of the 2019 PEC Conference, Peace for the Earth: From the Bible to the Front Lines. Over the course of three plenary sessions, Bill took participants from lament, to hope, and to resolve, using stories and scholarship to illustrate how we can take Biblical truths and transform ourselves into peacemakers for the earth.

Bill, professor of Old Testament at Columbia Theological Seminary in Decatur, Georgia and a leader in the Green Seminary Initiative, selected passages from both parts of the Christian biblical canon, to bring “text to table” (around which we all sit), and “text to relevance.” Using Psalm 104:1-35, as well as references to endangered and extinct animals, Bill reminded us that “all flourishing is mutual,” and that “every species is a world in and of itself; that with every extinction, a universe passes away.”

Bill lamented that, “God’s joy with the world is diminishing at an unprecedented rate,” as “we are reshaping life on this earth in terrifying, apocalyptic way.” But Bill said he finds hope in the work his daughter, Ella, is doing in Indonesia with endangered orangutans and slow lorises. He said that he also finds hope in passages from Isaiah 41 and 43, which indicate that our path leads to greater communal diversity and flourishing, and that the image of “streams in the desert” facilitates such transformation -- “it’s a call for coalition building in the care of creation; we are all in this together.”

Through the story of Job, “a patriarchal supremacist” who experienced his own ecological disaster, according to Bill, we are shown how we can experience ecological disaster and be transformed from “wound to wonder, trauma to comfort.”  The value of creation became obvious to Job, as he realized that God is there sustaining all life as subjects, not objects. The book of Revelation ends with the image of an “urban garden,” the river of life and the tree of life in the New Jerusalem, as the final sign of the apocalypse.   Bill concluded by saying that the church’s greatest calling is to be a “sign of the new creation – not the social club we call church," because "we are the beloved community for the biotic community.”

Ann Owen is a former Southwest Regional Representative for Presbyterians for Earth Care and continues to serve as an active volunteer.

PEC Honors Three Award Winners at
National Conference
Each year, Presbyterians for Earth Care (PEC) recognizes two deserving individuals and one organization for their exceptional environmental achievements. This year, awards were presented during a reception at PEC’s national conference, Peace for the Earth: from the Bible to the Front Lines, on August 7 at Stony Point Center in Stony Point, NY. The William Gibson Eco-Justice Award was presented to Natalie “Lee” Pippin, a visionary and activist from South Carolina. Ashley Bair received the Emerging Earth Care Leader Award for a young adult, and Westminster Presbyterian Church’s Earth Stewardship Ministry Team received the Restoring Creation Award for an organization. Continue reading for more about each of the award winners. 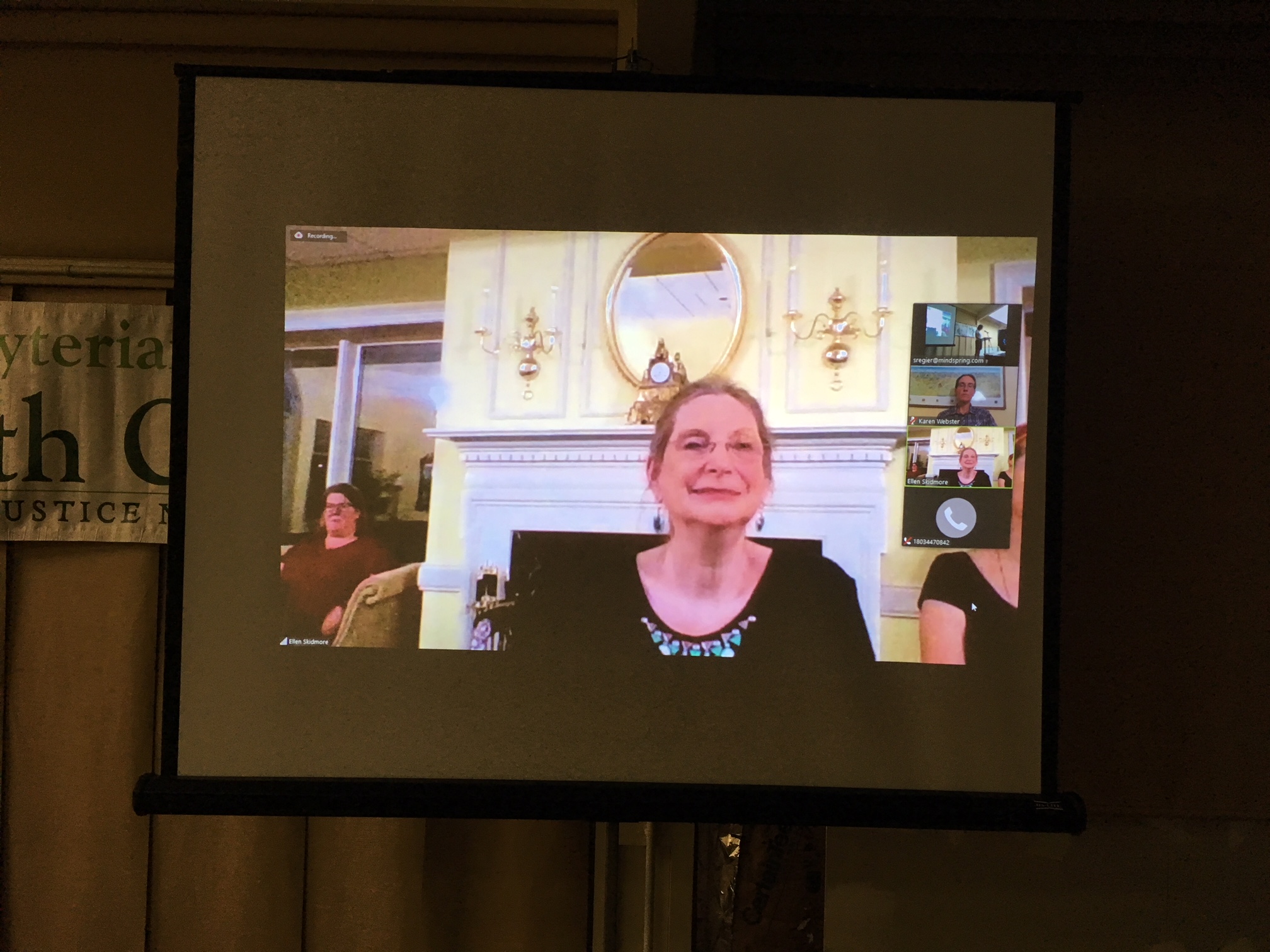 Lee Pippen has been described as a quiet, steadfast and persistent force for earth care. Not only has she consistently led her church, Forest Lake Presbyterian in Columbia, SC, since 2005 to be a creation care leader in the community and denomination, she also actively promotes environmental stewardship in SC Interfaith Power and Light, Presbyterian Women, Church Women United, and her Midlands of SC community organizations. At her church, Lee led her team of volunteers to become a PC(USA) Earth Care Congregation in 2011, and Forest Lake was awarded Presbyterians for Earth Care’s Restoring Creation Award in 2015. Lee has motivated many people to incorporate sustainable lifestyle habits that are healthier for individuals and for the environment. She has also been a motivator for congregations—both Christian and Jewish—to incorporate a focus on the environment into their programs. Lee accepted the award from her home via a ZOOM connection. 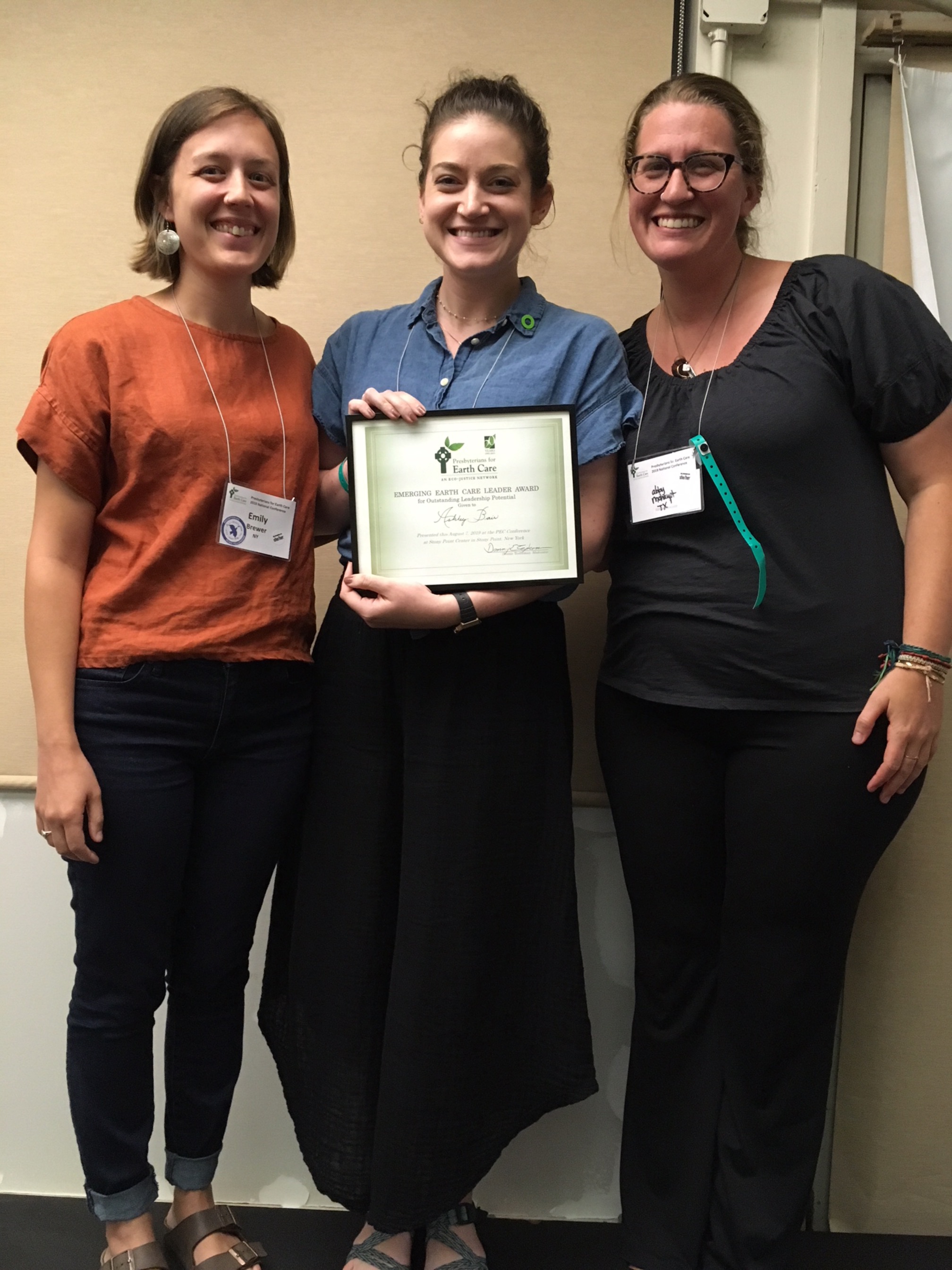 Ashley Bair is an associate pastor at Central Presbyterian Church in St. Paul, MN and embodies the values of the emerging earth care leader award. She is at the beginning of her ministry career and chose a call that would allow her to build on her experience and skills in organizing around climate justice and peace issues. She works with both religious and secular groups to advocate for climate justice. Ashley is a member of the Presbyterian Peace Fellowship Activist Council and helped organize the PCUSA Walk for a Fossil Free World. She is also an active participant in the Sunrise Movement, organizing and advocating for the Green New Deal and other environmental justice efforts. Ashley is committed to this work and ministry and will encourage others to follow her example through this Emerging Earth Care Leader Award. Ashley is pictured with Emily Brewer (left) and abby mohaupt (right) who nominated her for the award. 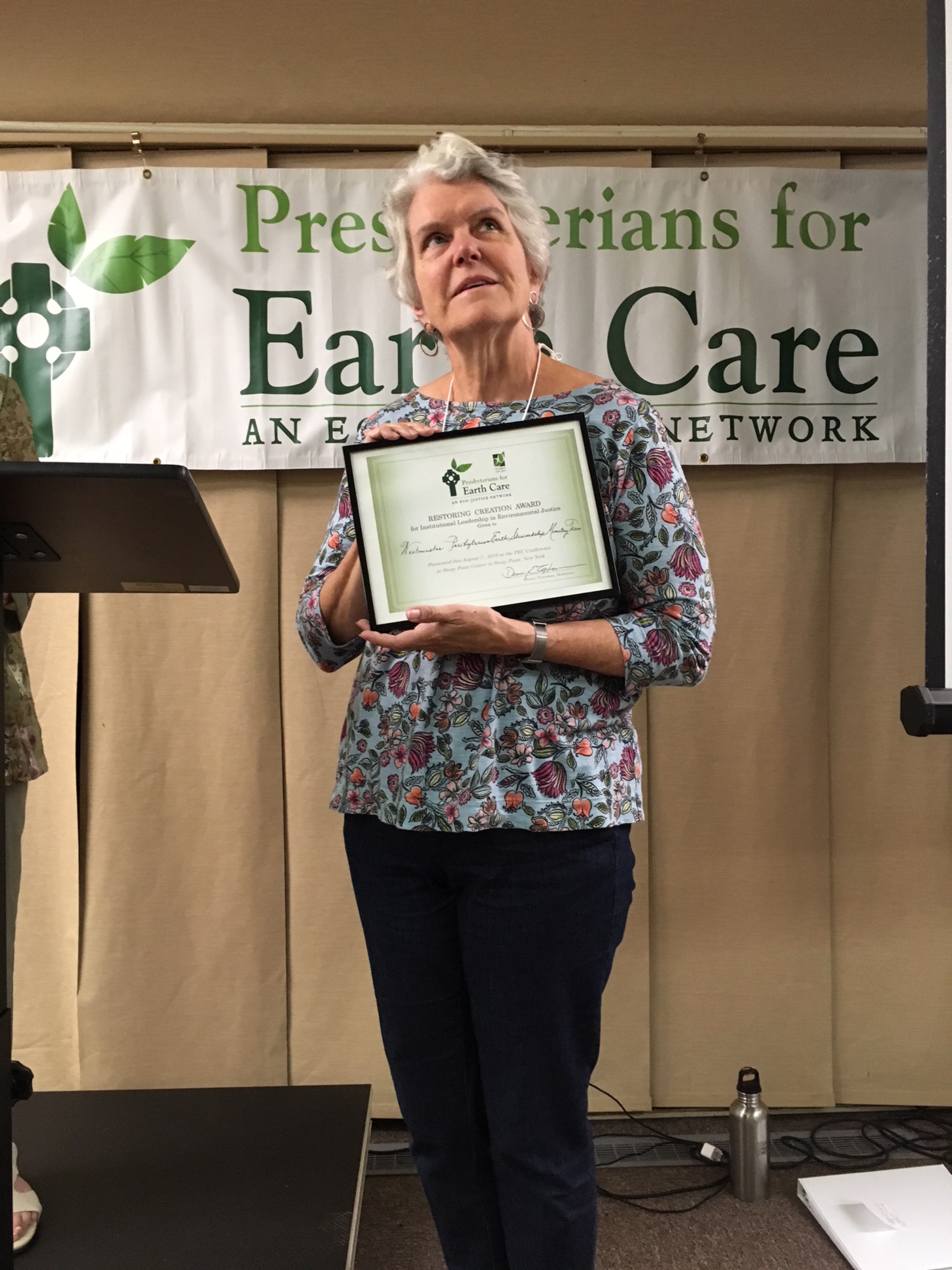 The Westminster Earth Stewardship Ministry Team provides education and environmental actions for members of Westminster Presbyterian Church in Dayton, Ohio since 2006. In addition to recycling and switching to LED lightbulbs, the teamof eight sponsors various adult education classes, and encourages a yearly Earth Sunday with stewardship-based sermon, local flowers and after-church presentations. In the spring, they organize a group to help with a park clean-up. Each month, they sell fair trade coffee, tea, and chocolate and collect electronic waste and batteries for recycling. During Advent and Lent, the group offers short eco-oriented meditations or suggestions in the Sunday bulletin. The church has won local awards and received a city beautification grant to help defray the cost of improvements. Westminster Presbyterian has been an Earth Care Congregation since 2017. Laurie Leach accepted the award for Earth Stewardship Ministry.

Congratulations to this year's award winners! Their conference registration was waived as a reward for having been selected to receive an award.
Posted by PresbyEarthCare Coordinator at 4:25 PM No comments: