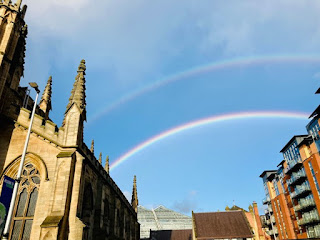 I started the day with attendance at the ACT Alliance intro to COP session along with Neddy Austudillo, Burkhard Paetzold and Bill Somplatsky-Jarman from our PC(USA) contingent. The ACT alliance group includes Lutheran World Federation folk as well as others and seems to be providing some very strategic coordination for the Christian faith contingent. There will be daily briefings about what initiatives are being considered. As I am a first time COP attender I am unsure whether this kind of monitoring is simply for reporting purposes or if there is hope that our presence may allow for some level of advocacy regarding eventual COP positions on various matters. According to one part of the briefing, it appears as though a great deal of the final shape of recommendations has already been pre-determined. For instance, it seems the impact on and involvement of women in the development and implementation of solutions is already being put on the back burner in favor of some other ill-defined priorities. 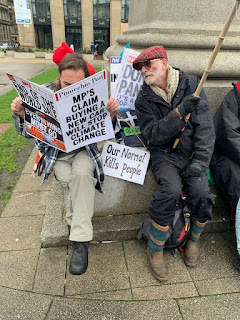 Following this meeting I made my way to the site of the opening plenary which was well underway only to realize upon arrival that I needed to have downloaded an admission ticket because they are trying to limit the numbers of people in the hall. So I was left with taking a few photos of exhibits and watching the livestream of some of the many speeches being offered by various dignitaries. I’ll know better when I go back tomorrow! 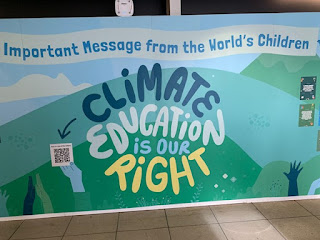 After lunch I went to George Square in central Glasgow where the Glasgow and Scottish Interfaith organizations had organized a prayer vigil to call on our spiritual resources for the decisions yet to be made in the coming days of negotiations. Representatives from several different religious traditions read parts of the Glasgow Multi-faith declaration which has been signed by more than 50 different religious leaders across the U.K.  The full text of the declaration may be found at this link: https://www.oikoumene.org/resources/documents/glasgow-multi-faith-declaration-for-cop26

Then additional speakers offered prayers and readings while members of their respective communities of stood in support.

We were also welcoming pilgrims from at least two different groups, one from the South of England and another that started in Katowice, Poland. I spoke with two German men who had joined that group along the way and walked (with the exception of the ferry from Europe to Scotland) 700 kilometers to raise interest along the way for a dramatic shift in global economies and ways of living and how COP 26 may encourage these. 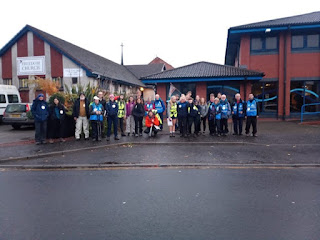 Posted by PresbyEarthCare Coordinator at 12:48 PM