Without proper ecological education, the people will be like a bird without feathers, they will always crawl and never fly...  Patricia Congo, Kenyan speaker at COP26 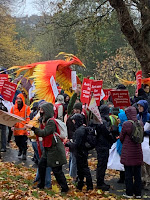 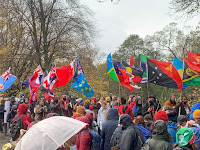 Saturday, November 6th was billed as the “Global Day of Action and Climate March”

Friday’s Youth March of some 10,000 or so with its headline speaker, Greta Thunberg fresh off the sailboat that brought her across the North Sea from Europe, had the good fortune of a rare sunny day. Saturday’s march of 100,000 had rain and cold and no really famous speakers. But we also had some rather spectacularly creative banners and symbolic sculptures such as birds, boats (and even a unicorn, though I’m told that was less to do with climate justice and more to do with the presence of the Scottish Independence Party). And we also had, after the rain stopped at around the third hour, a spectacular rainbow! Was it an omen? We could only hope. Then the section of the march that contained the 1000 or so members of the “faith block” was stopped in our tracks along with the Scottish Independence party and a number of other groups for around an hour. I had walked up ahead to check out the cause of the stoppage and learned that the police had stopped that part of the march due to some antics caused by some anarchist elements. But eventually the entire group made it to Glasgow Green where there were a few speeches (none that day by Thunberg, however).

Added together with marchers in other cities around the world, something close to one million people took to the streets that day calling for dramatic actions by governments for climate justice. 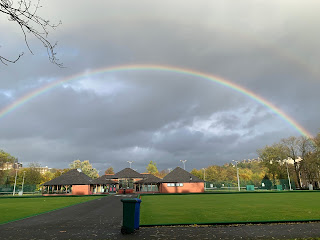 On Sunday, November 7th, I was required to preach a sermon at the congregation where I am serving in Glasgow.

Since it was the first Sunday following All Saints Day, I decided to tie together Hebrews 11-12:2 with Psalm 127 and speak about how future generations are dependent upon our present generation just as we are dependent on those who preceded us. I quoted the speech given by Queen Elizabeth in which she called upon the world’s leaders to take bold action to stem climate change “for the sake of our children’s children and all those who will walk in their footsteps.” I mentioned “earth overshoot day”, which is the day each year that scientists have determined is the point at which humanity has used more of the earth’s resources that can be replenished in that year. In 2021 this was July 29th. I called on the congregation to consider what this means in terms of the kind of world we are leaving to future generations. I then told about the Haudenosaunee (or Iriquois) native peoples in American history who practiced what came to be called the “Seventh Generation Principle” that every important decision of the tribe should consider what impact it would have upon the future up to the seventh generation. I proposed and that we should do the same if we would follow in the footsteps of the people of faith spoken about in the eleventh chapter of Hebrews. But I furthermore asserted that we are able to persevere in this difficult work because we have the accompaniment not only of that “cloud of witnesses” but because we have the presence of the risen Christ and the Holy Spirit to guide and empower us.

On Sunday evening, I attended an ecumenical service at the Glasgow Cathedral with representatives of a great number of denominations and a sermon delivered by the Executive Director of the United Methodist Church’s Global Missions department. She ended with a story about her mother’s death in the late 90’s at 11:29 in the evening. She then suggested that just as this death for her faithful mother had not been only an ending but a new beginning of her eternal life with her Lord, our current global death may also be a transition to yet greater things for life on earth.

Afterwards a young (10 or 11ish looking) Afro-Scottish boy recited a Robert Burns poem, “A man’s a man, for all that” with such enthusiasm that we could practically understand the scots language Burns wrote it in! According to one commentary on the poem and song lyric it “describes the true worth of man and how it is not defined by wealth, position, or possessions. The poem begins with the speaker describing how man's value is not contained in how much he owns or how he acts.”

The service then ended with a blast of the magnificent organ as the organist played Aaron Copland’s, “Fanfare for the Common Man.” 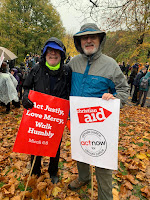 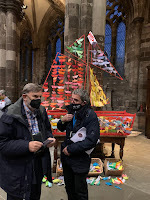 Monday, November 8th started as most everyday does with taking a “lateral flow” self-test using the test kits give us the day before we picked up our name badges. We must report the test results on a government website and then receive a confirmation text and email which we then must show at the gate along with our badges in order to be admitted to the COP “Blue Zone”.

At 8:00 we log in to the morning strategy session with the ACT Alliance leadership. A few days ago, several sub-groups were set up to monitor and strategize around how best to influence the issues of Finance, Adaptation, Loss and Damage, Gender and Article 6. (“Article 6 is a key part of the Paris Agreement. It allows Parties to voluntarily cooperate to meet their Nationally Determined Contributions, providing for international transfers of mitigation outcomes, a new mechanism for mitigation and sustainable development, and non-market approaches.” From article, “Decoding article 6”).

So these morning strategy sessions offer some glimpse of what meetings are underway which various members of the ecumenical delegates may choose to monitor and report back on. At this point, with drafts of position papers circulating, there still may be some opportunity to exert influence.

One of the ways an un-official group like ACT Alliance seeks to influence the process is through press releases with commentary about these drafts as well as something called “stunts”. A stunt is an short (30 minutes) sketch or dramatic enactment performed in the corridor of the facility primarily to illustrate a particular point related to some policy position or concern of the group in a way that is somewhat “photogenic”. These stunts are scheduled and approved by the U.N. so they must abide by certain rules such as not mentioning the name of specific countries. Today we did a stunt (see photos) about the issue of finances for assisting poor nations with the costs of what is called “loss and damage” due to climate change events like severe storms, droughts, fires, etc. Burkhard and I were given signs to hang around our necks proclaiming “rich nations” as well as bowler hats to give us a kind of “monopoly game” capitalist costume. We had a wine bottle with “oil” written on it and another large burlap bag with the word “coal” on it. We also had some fake coal to play with and a large fake check with “useless promises” and “blah, blah, blah” written on it. You get the idea. Then we stood and pretended not to want to hear as different members of our group read out stories of tragic circumstances of real people in poor countries who have suffered various situations resulting from climate change. The press seemed to like it. But we’ll see if it gets any traction. 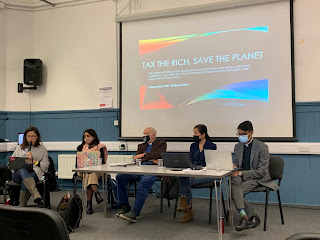 I attended an excellent panel presentation organized by the World Council of Churches office on the topic of tax reform for funding loss and damage, adaptation and mitigation. They discussed the new agreement to set an international base of 15% corporate tax rate as a hedge against international companies seeking out tax haven countries. We learned that the top 1% of wealthy people are responsible for 50% of CO2 emissions and that the bottom 50% of income level is responsible for only 7%.

An Anglican theologian, Dr. Peniel Rajkumar gave a powerful first person presentation of the story of Zacchaeus, the short tax collector from scripture. He described the Roman economic model within which he operated and his “come to Jesus” moment in which he realized how wrong his actions had been. His offering of four-fold reparations was the exact amount demanded in Old Testament law for when a sheep is stolen. This idea that taxation of the poor can be viewed as theft, is very biblical. The fact that it is after this expression of a willingness to pay reparations that Jesus pronounces “salvation has entered this house”, gave rise to another speaker saying that if we care about the souls of the top one percent, we will tax them more heavily. Dr. Rajkumar ended with a Chinese adage that says: “If we do not change our direction, we will end up were we are heading.”

I also attended a presentation by the All Africa Counsel of Churches on various elements of that body’s paper developed over a three day consultation held in Addis Ababa last year. They expressed a deep desire that the COP Secretariat make every effort to restore faith in the COP process after 26 years of seeming little progress on the issues it is designed to address, there is a deep skepticism among people in Africa about its utility.

Time for some rest before we get up and do it again.

Posted by PresbyEarthCare Coordinator at 12:25 PM