These notes were compiled by Karen Bennett, a former Volunteer in Mission for the Presbyterian Church and 35-year member of the Sierra Club and Bread for the World.  Karen holds an M.A. in French from Middlebury College and attends Jacksonville Presbyterian Church in Bordentown, NJ.  She is also active on Mission and Earth Care committees.

At the Presbyterians for Earth Care Conference, held in Little Rock, AR: from Oct. 16-19, 2013, the theme of "Ethical Earth Care: Keeping Creation Sacred" was led in Plenary sessions by Larry Rasmussen, ThD, who focused on “Earth-Honoring Faith.” He reflected on how the sacred and creation intersect.
Sacred traditions were organized by the following dichotomies:

What is sacred? David Gushee defines it as "something common lifted up and set apart, with elevated rank" Greta Van Wieren in Restored to Earth believes violating the sacred is a serious sin and often a crime.  The ecological virtues for restoring us and the earth also include a list of 5-"R"s:
-Reverence, Respect, Restraint, Redistribution, Responsibility, and Renewal.
What kind of communities are needed for ethical earth-care?  Dr. Erin Biviano's research on congregational environmentalism found the following elements necessary for environmental activism:

Final reflections, regarded having the "green blues" or environmental melancholia. How do Christians cope with irreversible climate change?  We are charged with leading people through grief and loss, trying to keep nature sacred.  We should work for the whole earth and not focus on single environmental campaigns. 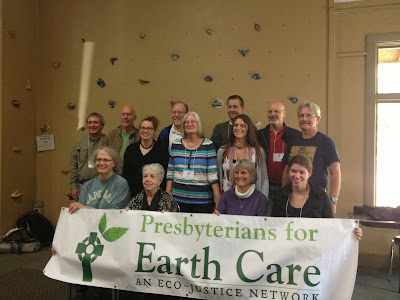 Posted by PresbyEarthCare Coordinator at 2:21 PM No comments:

Divestment! It's for you!

Dear friends,
You may have been hearing the term divestment a lot recently.  Divestment from fossil fuels is increasingly up for discussion in many institutions, especially houses of worship.
PEC membership, at our annual meeting at Ferncliff on Oct 18, voted enthusiastically to support the work of PCUSA Fossil-Free (PCUSA Divest).
We encourage you to talk with your General Assembly commissioners about divestment and begin a conversation in your congregation and presbytery.
We will share our booth at General Assembly with PCUSA Fossil Free and will work to encourage the work of 350.org and PCUSA Fossil-Free.
Divest & Reinvest Now! is GreenFaith’s campaign to support fossil fuel divestment and reinvestment in a clean energy future by faith communities. Presbyterians for Earth Care is a proud co-sponsor of this campaign!

Here are two great ways to engage members of your faith community and introduce them to this growing movement:

To help you get started, GreenFaith provides free sermon tips and discussion materials on the topic.
They'll also give you a free copy of Moral Ground:  a new collection of writings on religion and the Earth.  Simplyrequest your free copy by sending GreenFaith the date of your sermon or discussion.
On top of that, GreenFaith is offering two prizes of $250:  one prize for the best sermon, and one for the best discussion, on fossil fuel divestment and clean energy reinvestment.  GreenFaith will announce the winners and runners-up on June 15, 2014, World Environment Day.

Presbyterians for Earth Care is a proud co-sponsor of the Divest & Reinvest Now Campaign's initiative to promote sermons and discussions by faith communities on divestment and reinvestment!
It’s time to step forward.  Schedule a sermon or discussion today, and invite members of your wider community to attend.

When it comes to the planet’s future, this is a key moment.  Will your faith community rise to the occasion?

Blessings,
Diane Waddell and Sue Smith
PEC Moderator & Treasurer
Dear Lord,
Bless and energize each of us as we find our voices, speak our terrible truths, and humbly lay hands to the work that will mend what we have done to your good earth.  Send us your prophets who will speak to our fossil fuel misuse.  Forgive us for our overindulgence in carbon.  Let us remember that it is you  who are the light of the world—not our human created bulbs shining from a million sockets.
Thank you, dear God for your words, given each week to congregations across our land.  Give us ears to hear “what the spirit is saying to the church today”.
Amen
Posted by PresbyEarthCare Coordinator at 2:01 PM No comments:

Dear Friends,
Presbyterians for Earth Care is looking toward GA 2014 and encourages your involvement in overtures related to environmental and social justice issues. There are

at least four such overtures in various stages of the approval. Three are in need of a concurring presbytery, and I invite you to review these overtures and respond to the initiating presbytery contact if you are interested. (The concurring presbytery does not have to use the same rationale, just the main overture statement.)
Heartland Presbytery is in the process of submitting two overtures:
1.Sustainable Development:  The Precautionary Principle (the principle of ‘forecaring’.)  affirms the vital importance of an ethic of responsible and moral development of consumer products.  If governments/societies used the Precautionary Principle as a guide, the burden of proof of the safety of products coming to consumers would shift to the developer or corporation before the product is sent to the public.   Concerns most specifically relate to Genetically Modified crops, toxic chemicals, and products of nanotechnology.  Currently if a product comes to the public which is harmful, the burden of proving the harm is placed upon the individual or group in the public realm harmed.  This overture "affirms the Sacred in societal and Creation care, protecting the Earth for future generations." Read about Sustainable Development
2.Food Sovereignty for All  affirms the vital importance of Food Sovereignty, in which people are able to educate and empower themselves to manage their own food (and water) systems in a culturally appropriate and sustainable way, leading toward a just, peaceful, and sustainable world. This overture addresses hunger issues, unequal distribution of food and monetary wealth, water rights, land grabs, possible challenges brought by corporations, and Fair Trade (with definite concerns about the Trans Pacific Partnership free trade agreement). Read about Food Sovereignty for All
The Presbytery of Seattle is submitting an overture regarding  Coal Exports to Asia. This overture would be  “to affirm the decision of civil authorities to conduct a full, programmatic review and assessment of the impact of expanded coal export projects in Washington and Oregon on human health and the well-being of communities along the Northwest rail lines.”  Read about the Presbytery of Seattle's overture
.
Additionally, PC(USA) Divest is furthering its overture on Fossil-Free PCUSA and although it does have concurring presbyteries, is looking to add to that number. PEC voted in our annual membership meeting to support their position and overture!  We will be sharing our booth at GA and encourage you as individuals,

congregation, and presbytery to research and support Fossil-Free PCUSA!! Read about this overture here.
PC(USA) has information on how to submit  and concur with an overture.  If you have questions or comments and/or would be interested in concurring with an overture, please contact the PEC coordinator, Tricia, who will forward your email.
Strength, courage and wisdom as we care for this Sacred Earth,
Diane Waddell
Moderator
Earthkeepers of Heartland Presbytery
Presbyterians for Earth Care

Creator God,
Give us the passion to carry forward to our governing bodies the words so carefully crafted in these overtures. Give us the energy to change how we think of energy, food and protection from corporate negligence. Help us to put attention on these four overtures thatawaken us to deep places of pain on this gift we call Earth.

Amen
Posted by PresbyEarthCare Coordinator at 9:50 AM No comments: