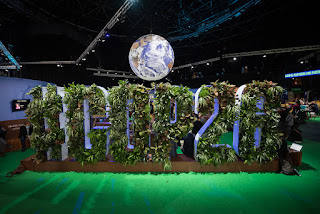 November 3rd was my travel day, and I arrived at night warmly welcomed by Fred Milligan, my host for the next few days.  Both of us attended an evening webinar organized and moderated by Religions for Peace and the Interfaith Rainforest Initiative. I was struck by three elements of that webinar:

1. The dark side of European and North American history with indigenous people was described by Bishop Marc Andrus of the Episcopal Church in San Francisco when he elaborated on the Doctrine of Discovery and the intersectionality of racism and the exploitation of nature. He reflected on a pilgrimage to Auschwitz during COP24 Katowice and his insight that it was so important that survivors of Auschwitz have fought for keeping the memories alive.

2. Bishop Mark McDonald, an indigenous Episcopal bishop from Canada, talked about the lives of indigenous peoples that are so “intimate with planet. Woven together that they can't be separated.” That means „solidarity and community with humanity“ and “solidarity with the rest of the creation“ are intertwined.

3. There can't be climate justice if there is no justice to indigenous peoples.  Mari Valjakka, a Sami pastor from the  Evangelical Lutheran church in Finland, used the word „Green colonialism“. This phrase resonates with me, when I think of our economic system which after having created the mess with fossil fuels now is only changing the technology, but using old patterns of externalizing negative impacts of the “green” technologies: from exploiting minerals for electrical car batteries to, in her case, putting wind turbines on Sami land.

Finally, today November 4th, was my first full day in Glasgow. Fred’s and my morning routine before leaving his home seem to be: have a cup of coffee, cook some oatmeal, do our Covid self test (we have to provide this to the authorities online), and sit down for the LWF -ACT Alliance virtual coordination meeting.  On this first day, Fred also  helped me to find my way.  My first impression: extremely crowded! But it was so good to see real people after all these zoom meetings I have attended.

Together we joined the plenary session of the IPCC where they discussed the latest findings in their August  report – and it was  an eye-opener.   „Human influence on the climate is unequivocal“, “changes are widespread, rapid and intensifying”… and they are “unprecedented“ across thousands of years (in case of the ocean acidification even millions of years). And after all they are „already affecting every region of the earth“ and “making extreme climate events more frequent and severe“. Some of these changes are already „irreversible“ but can be „slowed by limiting warming“ Reducing greenhouse gas emission would “reduce the frequency, duration and regions where heat extremes reach critical thresholds for health and agriculture“.

A delegate from India questioned the „low likelihood high impact events“. He didn't want them to be mentioned because the report sounds too  „pessimistic“  like a “doomsday scenario“. But the response from the IPCC panel was, we can't rule them out, because “even if the probability of occurrence is low the impacts on society and ecosystems could be high“.

I want to be clear.  It seems widely accepted among the participants that we must listen to science, that voices for radical change are increasingly more powerful, and at the same time  as the Act Alliance wrote in a recent press release we need all peoples voices heard.

„All around the world, people, communities, churches, and civil society are raising their voices calling for ambition, for action, for an end to weak commitments.“  Act Alliance is also  criticizing because not all voices are heard. „Women.  Youth.  Indigenous people.  People from vulnerable communities.  They all need to be in the room, at the table, and part of the conversation.“ The faith community is pressing hard to invite them at least into meetings of digital formats. 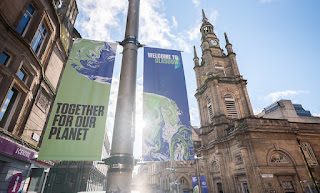 Today the November 4th faith community leaders Henrik Grape of the WCC and Valeriane Bernard invited us to an in-person coordination meeting and after mostly virtual meetings a large number of different faith traditions dealing with climate justice showed up. It was an impressive and inspiring group,and it was good to be together in a room after all.  Fred and I learned about the „Interfaith Talanoa Dialogue“ A meeting of that dialogue we had both missed has been recorded here.

After the meeting I got to talk to old and new friends, Peter Pavlovic from Brussels, Eco-Congregation Scotland, Quakers, Muslim climate activists and many others.

In the exhibition area, you find both a lot of „down to earth“ commitment, but also a lot of green-washing. On a large computer screen, Russia had an advertisement for “clean energy“ of the state owned nuclear power plant company. On the other hand, I found it fascinating to visit the pavilion of Indonesia and listen to presentations of how they deal with issues of just and transparent transition away from fossil fuels towards renewables.

Like I saw with the rapid adoption of cell phones in Eastern Europe to skip over the old rotten landline grid immediately they might just skip the fossil fuels area right away for renewables.

The idea of overcoming the coal age seems common sense to me and countries are making strong or weak pledges as to when they will end their coal mining and use.

In a plenary the Powering Past Coal Alliance showed how they’ve gained more and more support from countries like Estonia, Ukraine, Uruguay, the Netherlands and others, as well as from divesting companies like HSBC or ABP (one of the biggest pension funds) or even from coal mining regions like Walbrzich in Poland.  These entities are looking for a fast but just transition towards green jobs. Their encouraging growth shows me there is momentum and others should be wise to join quickly.

Posted by PresbyEarthCare Coordinator at 1:02 PM