“The Global Food Crisis You Will Always Have With You...” But Why?

The 2008 Global Food Crisis was a wakeup call for politicians around the world and for the hundreds of Presbyterians who joined in the PC(USA) church-wide fast. Now in 2011 food prices have risen again to record highs. Why? Because the causes of the crisis have not yet been addressed.
Eating has turned into a multi-trillion dollar industry with supply chains that can reach halfway around the globe. Small-scale farming still provides half or more of the calories people put in their mouths, but the US’s “get big or get out” approach has been spreading globally.

For centuries, local production has been a primary food security and safety net for people living on the edge of poverty. As more and more farmers are pushed to produce for the national and often international export markets, this safety net has been destroyed. Countries formerly self-sufficient in staples and other crops are now net importers, and people suffer immediately when prices rise. When this happened in 2008, 100 million more people joined the nearly 900 million children, men and women who were already suffering from chronic and debilitating hunger. Now it appears that high prices are here to stay.

Various international gatherings of thr UN, national leaders and multilateral organizations have declared the dire need for large increases in funding for agricultural research, training and production for Africa and countries throughout the Majority World . Billions have been promised and millions are slowly making their way to struggling countries, but it is critical that these approaches avoid the mistakes made in past decades and meet the needs of smallholder farmers.

A story from Guatemala illustrates the brokenness of the system and how deep changes must be made to bring prosperity to communities throughout the Global South.

In May, Felicity Lawrence from the Guardian UK told the story of Marina Tamupsis, her two-year-old daughter, Yessica, and her husband, Domingo, who live in the village of Willwood, Guatemala. Despite living in a fertile farming area near the Pacific Ocean, the family often goes hungry. The family is a victim of the global food crisis.

Domingo works to harvest sugar for a Guatemalan firm that exports agroethanol so you and I can fill up our fuel tanks. Domingo works 60-70 hours a week, but earns so little that he sometimes subsists on the fallen mangoes he can collect. Marina was hungry throughout her pregnancy and last year birthed a stillborn child. A friend had to lend them the money for a coffin. The Tamupsis family was blessed to be born in a beautiful country with rich volcanic soil, yet they are so poor the doctor had to lend them bus fare so they could return to bury their third child, Marvin Orlando.

Not only has the food and agriculture system impoverished their family, it has deepened the divide between the few rich and the masses of Guatemalans. Like much of the world, the poorest Guatemalans spend up to 80% of their income on food and are hit hardest as world food prices shoot up. Countries like Guatemala exemplify the tragedy where food is in abundance and still children go to bed hungry. In fact, tiny Guatemala is the fifth largest exporter of sugar, coffee and bananas. Yet half of the population lives in extreme poverty on less than $2 a day, and half of Guatemala’s children under five are malnourished. International traders are trying to cash in on the US and EU demand for agrofuels, and rural areas are seeing a palm oil boom, but neither the food, much less the profits, make their way to those like the Tamupsis family.

The current commodified, market-based approach to food and agriculture determines that only those with enough cash in pocket will eat. As believers, we say no to such cruelty and assert that the gifts of God are for all people, including future generations. All people have the right to healthy, culturally appropriate food, produced in ways that sustain God’s creation.

Let us together build local food economies that provide for all – both in the U.S. and around the world. Take action locally and connect with national and international food justice efforts by joining the Presbyterian Food and Faith Group and the US Food Sovereignty Alliance. Might the October 10-17 Churches Week of Action on Food and World Food Day be a launching pad for broader engagement? Learn more at www.pcusa.org/food, justice.groupsite.com and www.usfoodsovereigntyalliance.org.
Posted by PresbyEarthCare Coordinator at 3:39 PM 1 comment:

Dear friends and co-workers in environmental justice,
Social and environmental justice are bonded, woven together in the great web of life. They are a 'dynamic duo'. We, as humans, are part of the environment. We care for ourselves and each other as part of caring for Earth. I am grateful to be in a partnership of people who care for Earth because we want to, and also because we have to!
Food is one of the basic bondings we have. Oct 16 is World Food Day, a day for improving public awareness of the problem of hunger in the world.
Some of the unfortunate facts:

I am privileged to be a member of the Presbyterian Hunger Program (PHP) Advisory Committee. We meet twice yearly with the staff of the PHP. I am consistently amazed at the breadth and depth of the work of the program. PHP helps empower persons in the local community to work 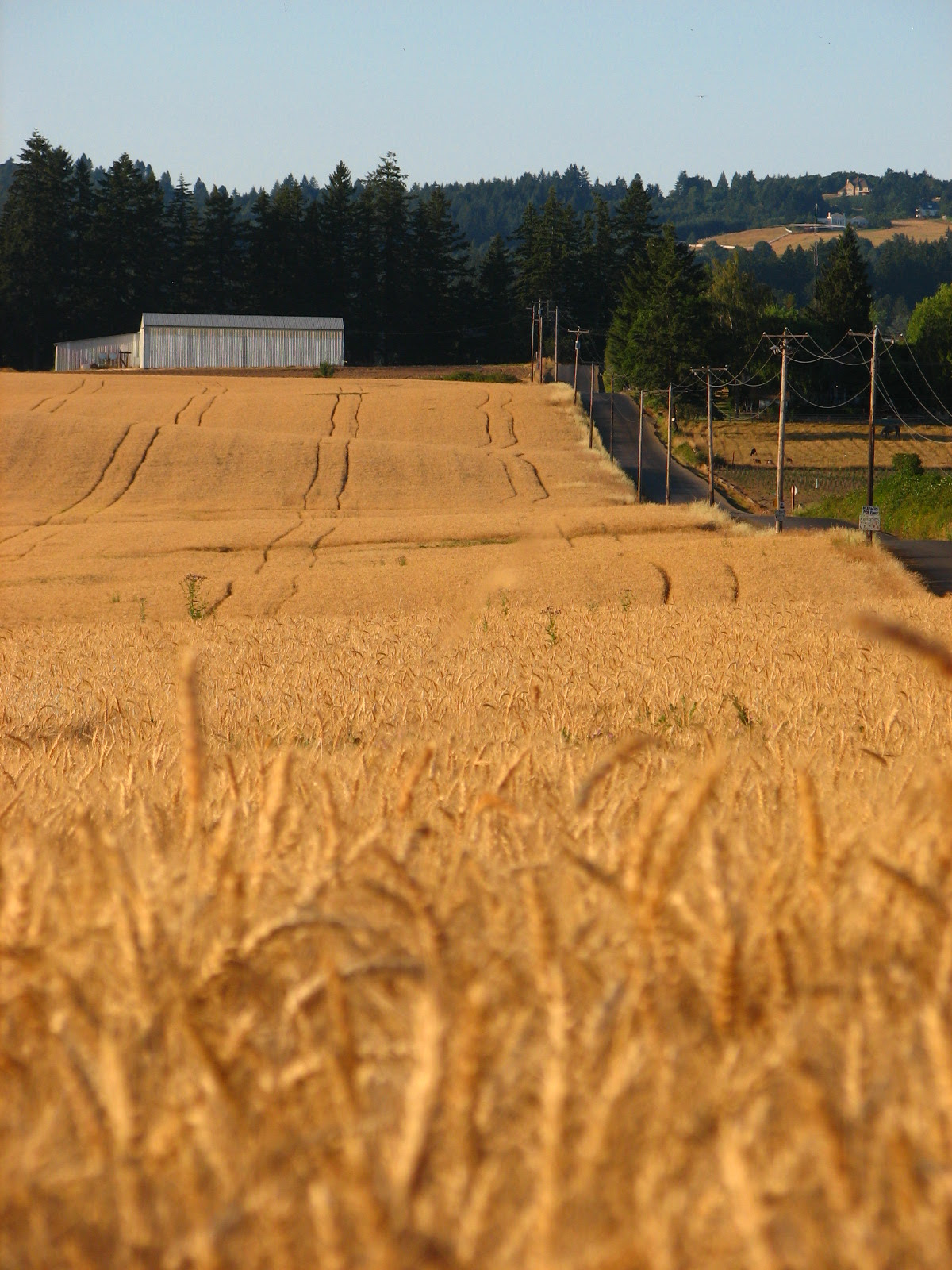 with projects that are sustainable and are aimed at the root causes of hunger. The PHP Advisory Committee reviews grants submitted to help fund programs both in the US and abroad. My heart is warmed by the number of grants written which support local organic farming and sustainable agriculture. In fact, one of the 5 guidelines is "a commitment to upholding the integrity of God's creation." I have also appreciated the tandem work between Environmental Ministries and PHP; it’s a great partnership.

A few weeks ago I attended the Prairie Festival, an annual event sponsored by the Land Institute in Salina, Kansas. The Land Institute works on sustainable agriculture, based on the use of perennial native prairie plants. They have developed perennial sorghum and Kernza, which is made from an intermediate perennial wheatgrass, and continue to work on other grains as well. It is a very slow process, but done with love and passionate commitment. My presbytery's environmental justice team, Earthkeepers of Heartland Presbytery, has written an overture to bring to the 2012 GA which supports this type of perennialization of grains. (Please let me know if you would like a copy of this overture in case you would like to concur or just study the concept.) The overture is based on the following booklet called "A Fifty Year Farm Bill".

We must continue to work diligently; to be faithful, to hold fast to the bond. Check out the Presbyterian Hunger Program’s work as well as its partner organizations listed on the website. Remain steadfast, knowing that hunger can be alleviated….and it can be done in a sustainable way. And as we work toward and meet that goal, Earth and its inhabitants will come rejoicing. For, in the words of the Spanish poet Frederico Garcia Lorca, “the day that hunger is eradiated from the earth, there will be the greatest spiritual explosion the world has ever known. Humanity cannot imagine the joy that will burst into the world on the day of that great revolution.”

To learn more about faith and the global food crisis, you can read this post on PEC's blog, written by Andrew Kang Bartlett, Associate for National Hunger Concerns at the Presbyterian Hunger Program.

Strength to you as we work towards environmental and social justice,
Diane Waddell, Moderator
Presbyterians for Earth Care
Diane_Waddell@sbcglobal.net
Posted by PresbyEarthCare Coordinator at 6:35 PM No comments: