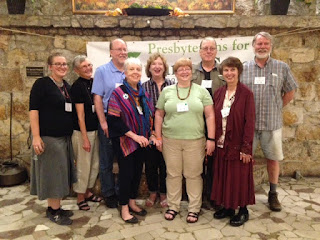 At our national conference, Down-to-Earth Advocacy and Action, at Montreat Conference Center last week, Presbyterians for Earth Care introduced our new Steering Committee for 2015-2016, welcoming two new members. Sue Regier was voted in as the new Treasurer, replacing Sue Smith who served the organization for more than six years and David Sholin was voted to take Rick Owen’s place as Southwest Regional Representative. 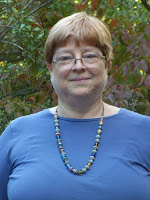 Sue Regier has been a member of PEC since 2004 and has many years of experience managing finances.  She has been on the finance committee at the Church of Reconciliation in Chapel Hill NC since 2010.  She is experienced in tracking funds, writing grants and managing grants through her professional work managing land acquisition planning and implementation for the NC State Parks System.  Her passion for faith-based justice is rooted in her family where her parents worked for social justice causes from a faith perspective.  Sue lives in Durham NC. 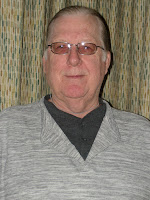 Our gratitude and thanksgiving go to Curt Karns, Rick Owen, and Sue Smith who have served PEC so well during the past few years.

Posted by PresbyEarthCare Coordinator at 3:11 PM No comments:

This year, Presbyterians for Earth Care will present its two awards for exceptional environmental achievements to an individual and an organization at its 2015 Conference, Down-to-Earth, Advocacy and Action.

The William Gibson Lifetime Achievement Award is given to an individual whose faith-based work for the environment deserves recognition. This year’s award goes to the Reverend Rebecca Barnes who has spent the majority of her life serving God’s creation as a faith-based eco-justice educator, activist, author, and organizer.

Rebecca served as the first Coordinator of Presbyterians for Restoring Creation (PRC), as it was known at the time, from 2001 to 2007. While a part-time Coordinator, she also worked with Bill Somplatsky-Jarman of the PC(USA) Environmental Justice Office as a program assistant from 2001 to 2003. After attending Louisville Presbyterian Theological Seminary, she began working in her local area to create dynamic, ecumenical, and inclusive worship spaces for engaging in eco-justice concerns, worked in local churches and ecumenical networks and continues to do so. She returned to the Environmental Justice office to coordinate the Earth Care Congregations Program, administer the Environmental Ministry Action Network and educate the denomination through webinars and a presence at national meetings and conferences. Rebecca is also the author of “50 Ways to Help Save the Earth.”

The Restoring Creation Award, given to an organization for outstanding environmental work, goes to Forest Lake Presbyterian Church (FLPC) in Columbia, South Carolina.

Since establishing its Environmental Stewardship Committee in 2005, FLPC has demonstrated its commitment to environmental stewardship through actively engaging all members of its congregation (children and adults alike) in “greening” the church property, their homes, and their neighborhood. These greening activities include education, recycling, environmentally sound gardening, and the conservation of energy, water, and other resources.

FLPC has long been an environmental leader in both the city of Columbia and the PC(USA). It was named the first PC(USA) Earth Care Congregation in South Carolina in 2010 and promotes creation care with its active leadership in networking with and supporting community environmental groups and other congregations. FLPC is continually striving to discern new ways of fulfilling this part of their vocation.

Join us as we honor these award winners during dinner on Thursday, September 17, in Montreat’s Assembly Inn Dining Hall in North Carolina, as part of PEC's 2015 Conference.
Posted by PresbyEarthCare Coordinator at 1:05 PM No comments: