People of faith in communities around the globe are joining their voices to call on political leaders to address climate change issues. Join Presbyterians for Earth Care as we join an interfaith effort to call on our leaders to craft a moral global framework for the UN Climate negotiations in Paris in 2015. Sign the Faith Climate Petition to let President Obama and Congress know that we need a strong climate treaty so that all nations will commit to combatting climate change.

We also invite you as a faith community or a person of faith to commit to taking a step – either large or small – to create a more sustainable world now and in the future by addressing causes of climate change. Climate change has been linked to burning of fossil fuels so the most effective way to control it is by reducing our use of coal, oil, and gas. Your step might be as large as installing a photovoltaic system on your home or as small as keeping the tires on your car inflated to increase gas mileage.  Either way, when we all join together we can make change happen. Make your own pledge to action. 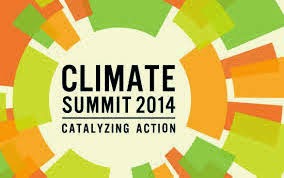 If you have not yet signed the Faith Climate Petition, please consider doing so. Asking your congregation to sign as an organization will increase the impact over a single signature. If you want to ask individuals to sign a paper version of the petition at your congregation, there are two ways to submit a list of names:
a.      Go to Faith Climate Petition and type in the signers’ information individually.
b.      Mail the signed petition sheets to: National Religious Partnership for the Environment, 110 Maryland Avenue, NE, Suite 203, Washington, DC 20002.

God has called us to be good stewards of the Earth and to care for all of God’s creation, including the “least of these.” Since the UN Climate Summit is taking place in September in New York – two days after the People’s Climate March – the timing is urgent to let our elected officials know that we are counting on them to insist on a strong treaty that requires all nations including our own, to take steps to control climate change.

Creator God, Open us to possiblilities! Put "yes" in our hearts as we discern what action is the "right size" for us. Let this September gathering be the largest voice ever raised on behalf of your incredible planet. Break open the hearts of our leaders that they might join our global family in changing how we use fossil fuels. Amen.


Posted by PresbyEarthCare Coordinator at 11:11 AM No comments: 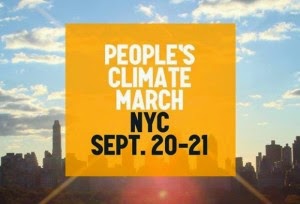 Presbyterians for Earth Care hopes you, as a person of faith, will want to get involved – by participating in the March in NYC, or by offering prayers or taking action in your faith community – wherever you are in the world.

Whether you can come to the March or not, your congregation can become a Climate March Faith Community. In addition, there are other actions that you can take:
Please join us to make this March a turning point in the struggle against climate change. Let us know if you plan to be there!

Heavenly Creator, give us the wisdom to care for this wonderful world the way you intended and the courage to speak out about injustices. Care for and protect all those who will be participating in the Climate March in New York City as they travel and as they act out their faith. We praise you, Lord, and ask for these things in your name. Amen.
Posted by PresbyEarthCare Coordinator at 2:29 PM No comments: