Swarm Intelligence for another Future 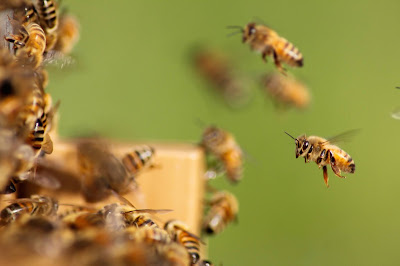 Walking along the hallways of the COP26 conference center in Glasgow feels like being part of a beehive. COP26 with a reported number of 40.000 participants is the largest global conference ever.

Being a beekeeper myself I know that our common image of a beehive being a chaotic “toing-and-froing” is not true. Bees constitute a larger organism with different groups of bees having specific roles. And, the patterns of their „dances“ are a “language” for communicating with each other. I won‘t go into detail, but it‘s fascinating to learn about this. In the end, however, we see this perceived chaos is actually a collective effort. Let’s call it swarm intelligence as a precondition to produce something beautiful, for creating the swarm’s future - honeycombs.

Such an organism should be a beautiful image of the whole COP26 process.

The truth is that unlike a beehive where only the queen bee, because of her ability to reproduce, has the power to hold this all together, in international relations some nations have more strength to push their interests through than others. Economically stronger nations have powerful fossil fuel lobby groups to put further pressure on the process. And, they do this not by competing in an open democratic process but by manipulation and through the back door.

The UN process, however, requires consensus, and that is good, but that process can’t avoid the tendency to water down language to the lowest common denominator.

Beehives have a Subset of Hive frames

My „hive frames“ are the ecumenical and the wider faith community here at COP26. “Earth Beat” (https://us8.campaign-archive.com)  describes  “that both officials and the media have discovered the power of religious groups” and quotes the AP, “The faith-based movement for climate action knows no denominational boundaries, as leaders of most faith traditions see it as part of their mandate to care for the communities most vulnerable to climate change and preserve what they see as a divinely given environment”.

Without the ecumenical group organized by the ACT alliance, without our ACT colleagues’  tireless work, mindful guidance, and strong encouragement I would have been clearly lost.

And Fred and I even had some fun participating in stunts that ACT alliance set up focusing on three key messages:

On Monday, November 8, we were actively involved in a stunt to promote a clear commitment to finance “loss and damage”. https://actalliance.org/act-news/climate-induced-loss-and-damage-is-a-harsh-reality-in-nepal-press-release-cop26/

Our action called for a solution to accept accountability for  “long-term impacts  like  sea-level  rises  as  well  as severe extreme weather events like Cyclone  Idai,  which  killed  more  than 1,000 people, left 400,000 homeless and destroyed 700,000 hectares of crops  when  it  struck  Mozambique  in 2019. International fundraising appeals raised less  than  50%  of  their  target, forcing  Mozambique  to  borrow  from international  institutions.”  As pointed out by MakeCopCount, (https://makecopcount.org/wp-content/uploads/2021/05/Faiths-briefing-combined-FINAL.pdf)

COP21 in Paris did not address loss and damage as an independent and additional category of financing with their own rules.

Fred’s and my role was symbolizing the rich nations ignoring loss and damage needs having their ears plugged with coal and are drunk from making money with oil.

On Tuesday, November 9,  I joined the call to „Climate justice is Gender Justice“ and we read  short stories of women in different countries in the Global South who lost their livelihood, their jobs, their houses, their plantations or their harvest because of climate disasters.

In many climate disasters, women and girls are among the most vulnerable. We want to keep the support for them as a priority and at the same time involve more women in climate mitigation and adaptation programs and projects which do not risk reinforcing patriarchal norms in climate solutions.

Creation is not for Sale

And our last stunt was on Thursday, November 11, „Creation is not for sale“ when Fred and I played two “distinguished gentlemen” trying  to bribe people  to give up on praying for diversity of nature, for human rights and for keeping the trajectory of 1.5 degrees alive.

All these stunts have been shared widely through ACT alliances’ excellent media people. The “loss and damage” stunt even hit the news in Dutch national TV.

One of the other „hive frames“ in a COP conference is the national and transnational pavilions, science labs and UN entities that promote aspects of climate mitigation and adaptation, e.g. those which deal with wind or solar power or those which address health, economic cooperation, or renewable energy.

Many pavilions set up their own programs, sometimes with a limited number of panelists or audiences, but zooming in panelists from Geneva or Cape Town, Santiago or Warsaw.

Most programs are life streamed and can be accessed online from around the world.

And, all this hive activity happens in  parallel to the  plenaries, side events, group meetings, action zone meetings or those of best practice presentations. Several side events were organized across the city of Glasgow, some in churches, some in the Green Zone as well.

The Zoomed-in panelists and the wider public or civil society able to participate wherever they are located, constitute an additional “global” frame for communication.

I believe the different hive “frames” have a bond which unites them:

I believe there is a momentum of collective wisdom. Isn’t the interwoven build up of all relationships to save human conditions by liberating God's creation on this globe a way to worship God?… like the way bee swarms produce honeycombs and care for and create their future is, in its deepest sense, a worship to the creator?

What then, brothers? When you come together, each one has a hymn, a lesson, a revelation, a tongue, or an interpretation. Let all things be done for building up. (1 Corinthians 14:26)

I returned home on Friday, November 12 and am just finishing my diary while watching the COP26 “end-game,” and as always there are  “cliffhangers” and a “show down”. It looks like those who wanted to water down the Glasgow Climate Pact  and had been unable to succeed in the open argumentation process used a last minute intervention knowing they actually don’t have arguments, but power - I can only see this as their clear weakness.  Or as the trade union speaker at an NGO forum said: “We are many and you are few”. 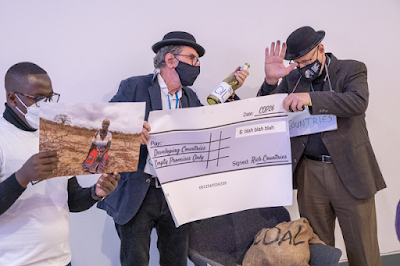 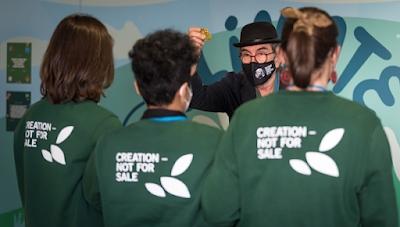 Posted by PresbyEarthCare Coordinator at 9:57 AM