This is the phrase being used by many this week after the world leaders made their impassioned speeches and left town. There’s a growing feeling that they just don’t get the extent of the crisis situation we are really in; that they need to be more ambitious in reference to the kinds of economic and cultural changes they are willing to ask their constituents to make in order to save humanity and the other life on the planet as we know it.

On the one hand there is the resistance to challenging the monied interests behind support of continued reliance on fossil fuels and the lack of sufficient funding for developing sources of renewable energy. But this reluctance seems to be surpassed only by a seemingly intentional blindness to the importance of significant financial support for the mitigation, adaptation and loss and damage being suffered by poor countries due to the affluent countries’ heavy carbon footprint; seemingly intentional ignorance about the importance of gender inclusiveness in the decision-making and implementation of changes necessary to battle climate change.

There seems to be a kind of cynical “green-washing” process that involves making impassioned speeches followed by empty promises. One example of this is Brazil’s signing onto the Reforestation Commitment signed by over 100 nations. Brazilians here note that their government had signed a similar agreement in 2014 and yet deforestation has not only continued but worsened in there since then. They do not feel the government intends to stop the killing of the rainforest and its inhabitants. 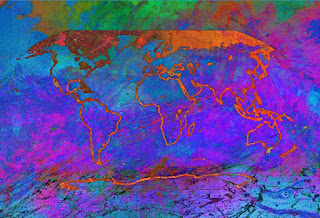 Changing by Alisa Singer"As we witness our planet transforming around us we watch, listen, measure … respond."www.environmentalgraphiti.org – 2021 Alisa Singer.

The report, released in August of this year was compiled by 234 authors from 65 countries.

And they are unequivocal: Humans are the main cause of these changes.

The report’s summary for policy makers may be found at the following link: https://www.ipcc.ch/report/sr15/summary-for-policymakers/

Here are a few highlights from the presentations:

More frequent and intense climate events are to be anticipated.

1.1 degrees higher than past century

Sea level rise in this century will be irreversible for centuries to come.

With every additional fraction of warming inhabitants will feel the difference in climate.

Valerie Masson Delmotte IPCC WGI co-chair lead much of the discussion of the report.

She, like Dr. Lee, was very clear about the findings of the report.

No evidence of anything like these changes in the history of the planet.

After laying out their findings about where we are now and why: Buildup in the atmosphere of greenhouse gasses with Co2 and Methane being the two worst ones. She then led a presentation on various scenarios of what the world may expect regarding how things may or may not change in the future depending on what actions are taken by the people of the world over the near future. It put me in mind of the book by Charles Dickens, A Christmas Carol, in which Ebenezer Scrooge is offered the chance to have his story turn out differently than it may if he continues on his current path. The good news is that there is still time to make the changes we must make if we are to leave a world for future generations that is anything like the world we and our ancestors have enjoyed. The bad news is that there seems to be in-sufficient ambition or a willingness to shake up the status quo. We seem to be like the proverbial frog in the pot with the water becoming warmer so gradually that it will be boiling us by the time we realize we are doomed.

The representative from the Indian government spoke to the panel saying that he felt they should not have presented scenarios which seem unlikely because these may cause undue alarm and lead some to feel it is too late to act. Perhaps this is because his own government has set its goals for “net-zero” carbon production to be realized only in 2070.

But the panel stood by its process, saying it offered its scenarios based on strict scientific knowledge and probabilities of acting in more or less dramatic changes now or at various points in the next 5, 10 and more years. 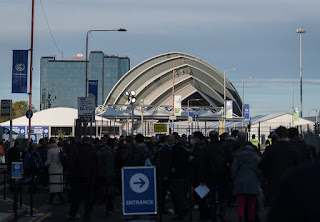 There was an Interfaith meeting, convened by the co-chairs of the World Council of Churches Working Group on Climate Change Rev. Henrik Grape and someone else whose name I did not hear. I was glad I arrived in time for the meeting as some were not allowed inside due to covid restrictions of room capacity for the safety of participants.

Rev. Grape spoke about a draft documentation of concerns of the various faith communities as expressed in the Talanoa from the 31st. The term Talanoa comes from a process developed by Pacific Islanders in which parties seeking to come to consensus gather and express their ideas and concerns. This process has been used with inter-religious groups gathering each year around the COP since 2017.  This dialogue was held on the first evening of the COP at a Synagogue in the city of Glasgow and was attended by over 200 people.

Grape is formulating the draft of the document out of the concerns and ideas expressed during that session: advocacy, finance, loss and damage, gender-inclusive adaptation, youth, indigenous and more. As this interreligious group is not an official organization the document may not have standing before the Secretariat, but Grape hopes to make the argument that there should be a space created within the listening processes of the COP decision processes for hearing from people of faith regarding their perspective on these matters. This document will be presented to the Secretariat next week but a draft will be circulated first among all those interested in seeing and commenting on it.

One of the key questions Grape feels such a document may help us deal with is: “How do we press forward on the making of Eco-cide an International Law?”

WDCD runs a contest with financial support of the IKEA foundation called the “No Waste Challenge” in which designers compete for a prize of 10,000 pounds by creating a design that is built around the principles of Circular Economy, meaning a product with a life cycle that doesn’t go from store to dump but rather creates no waste that cannot be recycled. Learn more at: https://www.itsnicethat.com/news/no-waste-challenge-winners-what-design-can-do-creative-industry-150721

The director, Richard Van der Laken, has been operating the project for 10 years, and reported that they had over 14,000 submissions to their most recent iteration of the contest.

Lastly, I attended a forum in which the COP President and Executive Secretary met in a facilitated Conversation with a set of selected NGO representatives.

The discussion question “how can we increase ambition?” had been suggested by the participants who seemed to want to communicate to the leadership that they are not setting sufficiently ambitious goals before the global community around the adjustments needed to slow global warming.

A secondary question was: “What is needed to drive political ambition?”

Comments came from the NGO groups in reverse alphabetical order:

“Need the G20 countries to come forward with bigger commitments”

“Need clarity around and implementation of financial commitments”

The term “net-zero” being used in a “Green washing” strategy by polluters to allow them to continue to pollute.

Trade unions of the world

Need to be in implementation, not talking phase.

Loss and damage must be a permanent element

Article 6: do not allow a “leaky” system to erode the foundation of the Paris agreement

Researchers from around the world

Sources of optimism and hope

1.    Number of cities and regions that are developing mitigation and adaptation plans

2.    Amount of agricultural initiatives around the world 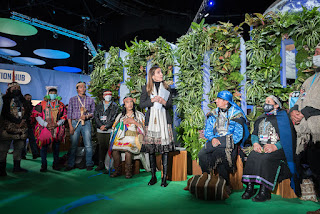 Ambition is to stand up for the role of IP to defend and care for and speak for the land.

NDC’s must consider ALL the needs of farmers

Science based and nature sensitive solutions

·  Needs based Loss and damage based on “poluter pays” principle

·  Concern about commitment to inclusivity

·  Call for accountability from Presidency on mismanaged expectation

Children and Youth depend on COP for leadership for survival

Bio-diversity AS WELL as Climate crisis

Nature based solutions must lead the Way

Asking that architects globally be engaged

Any discussion here that doesn’t include health will be dishonest

Tibet is warming at twice the speed of the rest of the world.

Asked to be more formally included in the process

(This suggestion received a round of applause)

Need to reduce emissions in THIS decade

As well as seeking nature based solutions

Posted by PresbyEarthCare Coordinator at 1:39 PM