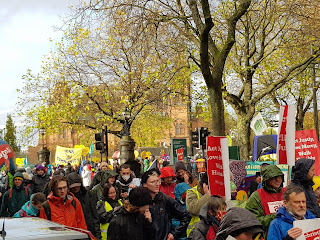 Which earth will we hand down to our children?

Friday, November 5 was declared  „youth day“ at COP26. The UNFCCC assigned this day to the world’s youth, because they will inherit the earth that we - the older generations - so far have shaped and will continue to shape significantly.

As we came to our train on Friday morning, we saw small children with their mothers at the station. The kids were carrying signs heading to a park in Glasgow where Greta Thunberg would speak. One little one had a half painted poster that read: „Be green not mean.“ The Fridays for Future movement had organized another school strike and thousands of youth were filling the streets of Glasgow as well as many other cities and towns across the UK.  „What do we want? Climate justice! When do we want it? Now!“

My first meeting this day was about the role of parliaments in addressing climate issues. We heard speeches from British MPs and committee chairpersons about their efforts to prepare for more consistent lawmaking and to scrutinize government policies. We heard speakers from Uganda, Pakistan and Indonesia on how climate laws in their countries had been introduced and specific committees had been installed.

My most burning questions, however, were how national parliaments give the younger generation voting rights, establish structures to regularly and seriously consult with youth, or in general encourage and empower youth to participate in the democratic process. Being a member of a county council myself in my region in Germany I‘m glad that our state law requires consultation with youth on a regular basis. But, I also know how difficult it is to move beyond tokenism and genuinely trigger interest in young people to engage in a process where there is a tedious task ahead. So, I raised my hand but was actually happy when a young woman spoke first and asked  exactly this question. Of course politicians always have wonderful answers to such questions. They referred  to their round table talks with youth, promoting green jobs, as well as changing curricula in schools.  But when I spoke with the young woman afterwards, her experience was not so satisfying. 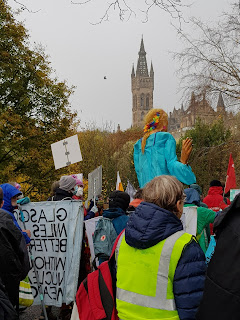 Mutual learning rather than top down education

It’s absolutely necessary to include information in school curricula about the human-made climate crisis and those who are already suffering.  But does this create empathy? How much empathy comes from news programs that run climate  disasters as an infinite loop? There were young people in a panel discussion I watched who presented  a book project in which youth from different countries mutually educate youth from other countries about how they themselves and their families are affected by climate change and what they are able to do about it. Everyday stories that don‘t make the news are personal and easy to understand and thus create empathy. The audience had additional suggestions: use comics to tell the stories, include art or complement the programs with easy to read scientific explanations. 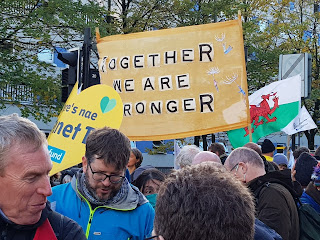 Climate Champions at a Panel with COP26 President Sharma

How can empathy become a precondition for action? How might action lead to perceived self-efficacy and help to deal with frustration?

COP26 President Sharma had invited „Climate Champions“ to a panel discussion to elaborate on such questions. Among them was a young women activist. It was exciting to hear the  different viewpoints.

If I may simplify, I recognized two different views among the climate activists. Some climate organizations from the Global North basically say: We have momentum right now, an exponential growth of divestment from fossil fuels, and government pledges for net zero and an increase of „green“ technology. Businesses can now see a perspective and start to turn their big investments. So let's just work hard to tick this off and to reduce greenhouse emissions as fast as we can to stay at the 1.5 degree goal. With this in hand we are prepared to make socioeconomic changes and create more global justice.

The climate justice activist from the Global South and the youth activist were saying, if we just focus on changing the technology but stick with the same old socioeconomic  patterns that have led to the crisis we won‘t achieve anything and will just keep on dividing the world even further. We don't need another set of corporate solutions. Covid19 has shown who suffered the most.  These are the same communities that suffer from climate change. (Not in 40 years - but now!) We have a constantly growing - a hyper inequality. So we need to be contextual and address the massive suffering. What we mostly need is solidarity to begin with.

COP26 President Sharma summarized: Yes, we have made progress but we have much further to go. One of the  worst disasters, he said, was in Madagascar - the first climate-made famine. And: Young people being angry - have all the right to be angry!

Does his speech sound as if he‘s begging for help from the activists because negotiating parties get lost in details?  Did I hear a hidden signal from him that says, “We need your help and your pressure? Be loud, your suggestions will be heard.”

After all these big words, it was good to  be grounded. I went with Fred to a Methodist church in town. In an adult education class, a Black female pastor talked about a youth program for climate justice of the Waldensian and Methodist church in Italy.

And in the concluding discussion about how everyone can contribute - even seniors or disabled - a woman of the congregation said, “I‘m old and disabled and can‘t leave my home much. But I can sit on my computer and sign petitions or write my own letters to my MP. Together with those letters I pack a little self-knitted canary. As you may know canaries have been used as early warning birds in coal mines here and elsewhere. Take these as a sign of early warning of the climate crisis.”

Will our voices be heard?

There have been actions all over the city these days and even in the UN conference center. I already mentioned “Fridays for Future”.

Another big demonstration was organized Saturday. The ecumenical  and the whole faith community had called to attend, local churches and groups of other faiths helped with preparations. But also Greenpeace, political parties, and many others. We were prepared for heavy rain as forecasted and started together with ACT alliance, Christian Aid who had prepared posters and Swedish Lutheran youth from a church and began with a beautiful prayer by a Black Anglican pastor.

Our first stop was a park where the different groups gathered. We were standing in rain, fallen leaves and mud and I met an elderly lady who had come from a little village near the English border just on her own and all the time she held very tight to a bunch of chrysanthemums from her garden wrapped in paper. Her demands were scribbled on this piece of wrapping paper. It was about „no more than 1.5 degrees“ and „solidarity and justice for all“ and she had sketched little worms and caterpillars she wanted to stay alive in their diversity. 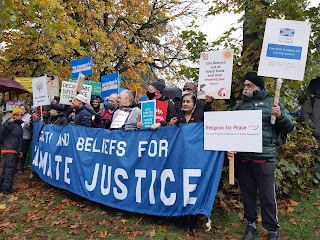 Sunday is a good day to look back at the last weeks events and achievements and to look ahead at the coming week and of course a day to celebrate and to pray and – not to forget to rest.

Act Alliance had organized a strategy workshop in a Glasgow College building. Some of the Act Alliance experts had actively accompanied the negotiations for finance for gender and for human rights related questions.

What has been achieved so far? There are reports about a stop to deforestation, an initiative to reduce methane emissions (another important greenhouse gas besides CO2) and an end to coal. You can read about the  pros and cons and the relative impact of such announcements in the newspapers (e.g.  https://www.theguardian.com/environment/2021/nov/07/so-what-has-cop26-achieved-so-far?CMP=Share_iOSApp_Other)

The process of finding agreements in finance is particularly complicated. The Paris goal to spend $100 Billion per year has not yet been achieved, but postponed. And there are many open questions regarding the balance between mitigation, adaptation, loss & damage, to prevent double counting or relabeling of different categories. Another question is under which conditions government money can be used as seed money triggering investments (Britain and others came along with mouthwatering prospects about trillions of dollars that can be made available when businesses are involved) and in which circumstances grants or loans are appropriate. We discussed in our group that the criteria sustainability, resilience, circular economy, community-based economies or agriculture are most probably different from corporate interests.

In the afternoon Fred and I were invited to an ecumenical worship in the Glasgow Cathedral. I remember the art exhibitions of paintings that have been half blackened out so that in a person's portrait only the head is still over water and the little paper boats with prayers collected from all over Scotland. And I remember the old testament reading from Job 12:7-10 which spoke to me in a new context:

Posted by PresbyEarthCare Coordinator at 10:59 AM