Honoring our Faith in Harvest Time

I serve a rural, farmworking community in Northern California. Over 85% of the school district is Latino, and over 50% of the people we collaborate with at the Resource Center where I work are farmworkers. Our lives together are marked by immigration and the movement of the seasons and the work day on the farms. Our work together reminds me that a just food system (that honors the needs of workers and the earth and all people who eat) is part of eco-justice.

This month we've been preparing for Dia de los Muertos (the Day of the Dead), a tradition thousands of years old that's influenced by indigenous Mexican and Catholic rituals. We've labored over sugar skulls and papel picado and memorial stones for a labyrinth walk. Last night we gathered at our community's last farmers market of the season to give thanks for the lives of those we've loved and to give thanks for another successful season of planting, cultivating, and harvesting. 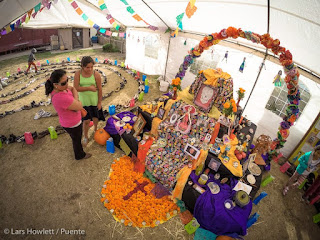 Many of the people who joined in the observance are far from their homes, migrants who have come to Pescadero to work on the land so that their families in their homelands can have a better life. They braved traumatic crossings to make it here. They toil under the sun in literally back-breaking work. They grieve for the places and customs and people they know.

It's the end of this season that reminds me of how we are called to care for creation in all seasons. The end of the harvest season reminds me that winter is coming.

Winter is not fun. Another Midwestern friend who lives in the Bay Area and I have been talking about how we still have all our good winter clothes with us because we cannot bear giving them away--sturdy boots, thick coat, warm hat and gloves. Winter is harsh and hard  and it means that things end.

This morning, I walked on the beach, listening to the waves and watching the birds. In the distance, there was a mound on the sand, and as I got closer I recognized it as the corpse of a seal. Crows were picking at it, and I stopped to take in the life of this creature. 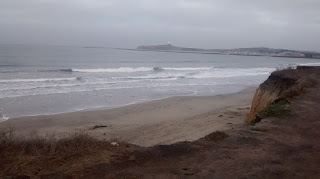 The waves lapped against its body, ready to reclaim it when the tide was right.

Its life is over, yet it's sustenance for the crows and for other parts of creation.

It's the end of this season, the death of what we know, but death always means life, no matter where we are.

Dia de los Muertos celebrates life and acknowledges that the dead and those we love are always with us. The change in season reminds us to honor and celebrate the time of life we are in and the place on this planet we get to call home.

The Beginning of the First 20 Years

PEC observed its 20th Anniversary with a special evening of worship, recognition, and reception on September 17 at Montreat Conference Center. To commemorate the “Inheriting a Sacred Trust for the Future” celebration, Nancy Corson Carter wrote this short history of the organization.

In 1990, the 202nd General Assembly approved the policy report RESTORING CREATION FOR ECOLOGY AND JUSTICE. Part of its great success was due to the grassroots authenticity of its writing.

The charge of the document was to recognize and accept restoring creation “as a central concern of the church, to be incorporated into its life and mission at every level.” In1994, when about 40 persons gathered at the Presbyterian Center in Louisville for an “Environmental Consultation,” a major result was the envisioning of “an environmental justice fellowship, an outside group, to impact the PCUSA.” A group of persons, soon to become the founders of PRC, felt themselves called to extend support of the dynamic 1990 mission initiative.

New Membership Secretary, Bill Knox, sent out a call for support:  “We invite Presbyterians who hear the cry of creation, human and nonhuman, as God’s call for stewards for an endangered planet. Join us in this fellowship to restore creation, as we seek to be faithful to Jesus Christ, our Redeemer.” By the 1995 General Assembly in Cincinnati Ohio, a Steering Committee had prepared bylaws and organized the first of regular General Assembly luncheons, with Dr. John Fife as speaker.

So Presbyterians for Restoring Creation (PRC) was born, an organization that has matured over its two decades as a member-based, grassroots, 501(c)(3) non-profit organization operating alongside the Presbyterian Church (U.S.A.) and also in ecumenical circles.

In 2009, the group reclaimed its purpose on its website, www.presbyearthcare.org: “Honoring this great heritage, the leaders and members have responded to the growing national awareness of global climate change with a renewed vision, a new name and a timely mission. Presbyterians for Earth Care (PEC) has stepped up its capacity to connect and equip the environmental movement in the Presbyterian Church (U.S.A.) through a new website, database, and social networking sites.” 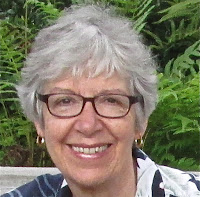 Nancy Corson Carter, Ph.D., is a publishing poet and writer, facilitates an Earth Care Congregation in Chapel Hill NC, and is active in the Shalem Society for Contemplative Leadership. She is Professor Emerita (of Humanities) at Eckerd College, and was Moderator of PRC from 1999-2005.

Posted by PresbyEarthCare Coordinator at 8:24 PM No comments:

on Down-to-Earth Advocacy and Action

In her keynote presentations at the Presbyterians for Earth Care conference recently, the Rev. Dr. Patricia K. Tull, author of Inhabiting Eden: Christians, the Bible, and the Ecological Crisis, shared her insights into how we can rethink scripture, humans, and creation; create social movements for change, and shift to a flourishing future. The biennial gathering, September 15-18 at the beautiful Montreat Conference Center in North Carolina, marked the 20-year anniversary of Presbyterians for Earth Care (PEC), formerly Presbyterians for Restoring Creation.

Special guest speaker Rev. Dr. J Herbert Nelson II, director of the PC(USA) Office of Public Witness, encouraged attendees to get off their “blessed assurances and do something significant for the Lord.” He said that we should work to connect the sanctuary, seminary and community to environmental and social justice through active engagement and advocacy.

At each conference, PEC bestows two awards: the William Gibson Lifetime Achievement Award, which was presented to the Reverend Rebecca Barnes for her faith-based work as an eco-justice educator, activist, author and organizer; and the Restoring Creation Award, which was given to Forest Lake Presbyterian Church (FLPC) in Columbia, South Carolina for outstanding environmental work.

The conference was held in conjunction with the Presbyterian Hunger Program PC(USA), which held concurrently their 2015 Summit for Earth Care Congregations and 2015 Hunger Action Enabler Training. Rebecca Barnes and Jessica Maudlin, associates for Environmental Ministries and Enough for Everyone, respectively, provided opportunities for ECC representatives and Hunger Action Enablers to learn, share and network.

Two optional pre-conference tours were offered to those wishing to explore some of the many natural attractions of the area: a nature trek at the North Carolina Arboretum; sustainability tour of the Biltmore House and Gardens; and a visit to the world’s largest climate data archive the NOAA National Center for Environmental Information in Asheville.
Posted by PresbyEarthCare Coordinator at 4:08 PM 1 comment: