What happened at General Assembly in Portland?

PEC had a strong presence at the 222nd General Assembly in Portland, Oregon last month. In addition to staffing our booth in the Exhibit Hall and hosting our Luncheon and Awards Presentation, we also supported many eco-justice overtures. All passed through committee and then the Assembly with the exception of the Fossil Fuel Divestment overture. In summary of General Assembly, Bruce Reyes-Chow (Moderator of the 218th GA) tweeted: “While there have been many ‪#‎GA222 decisions that have gone the way I had hoped, our failure to divest in fossil fuels is a monumental miss.” The results of the overtures are listed below.

•   On Amending “The Ministry of Members,” by adding “Caring for God’s Creation passed pretty handily in both committee and plenary. The beauty of this overture is that now it is being sent out to the Presbyteries for a vote to include in the Book of Order, requiring all Presbyteries to talk about caring for creation.
•   On Choosing to be a Church Committed to the Gospel of Matthew 25 was amended with comments that did not materially change the overture and passed unanimously in committee and by voice vote in plenary. The Matthew 25 overture includes protecting the poor from climate change and streamlining the process by which eco-justice concerns are brought before General Assembly.
•   On Advocacy Against Factory Farming was approved as amended in committee and in the Assembly. It still calls for advocacy - for humane treatment of animals on any size farm, but some of the language that was added is not consistent with the original meaning of the overture. 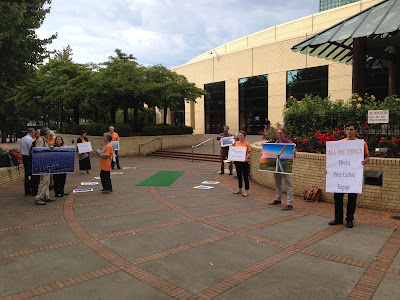 •   On PC(USA) Fossil Fuel Divestment passed out of committee as written. However, a minority report was filed and it became the main motion in plenary and passed. In the end, MRTI is to continue engagement and come back to the next GA with recommendations, possibly to selectively divest from companies.
•   On Witnessing Against Environmental Degradation and Affirming Public Policy to Support Good Stewardship of Natural Resources was approved unanimously as amended in committee and by voice vote in the Assembly. This document gives the offices of the Presbyterian Mission Agency the authority to speak out on issues of fossil fuel extraction, processing, transport and storage and gives voice to the “least of these” who are disproportionately affected by fossil fuel carelessness.
•   On Communicating Gratitude for and Study of the Encyclical “Laudato Si” passed in committee and was approved on the consent agenda in the Assembly. This overture celebrates the brilliant work of Pope Francis’ Encyclical to all people and affirms the moral ground that we of faith have in protecting our planet, humans and creatures. It also supports an annual ecumenical day of prayer for the Care of Creation on September 1 to be included in the PC(USA) program calendar.

We are grateful for the work of individuals, churches, and presbyteries in their guidance and witness in writing and following through with these overtures.

Posted by PresbyEarthCare Coordinator at 7:46 AM No comments:

Peace and grace to you!

Many thanks to Abby Mohaupt for the invitation to write about the "wins" of General Assembly (GA)!

What a great framework that is… as it reminds me of all the positives about this biennial gathering of fellow Presbyterians!  Many of us are still holding the energy of people and experience of the assembly with us!

Those of us who have been planning PEC's presence at GA were thrilled to visit with the many people who came by the exhibit hall and shared their passion about creation care. We greatly enjoyed sharing our booth space with Fossil Free PC USA! What a blessing to be able to feel and share their love "for creation!”

The PEC luncheon and Awards Presentation was a huge success! We planned for 100 and 100 attended! It was a gift to share an exquisite meal with beloved friends. We are so grateful for Rebecca Barnes and Gary Payton, who shared with us "Beyond Paris"… the work of the Paris climate talks and how the world needs to respond in this crucial time.

Of course there were numerous overtures which we had helped shepherd  through a long  process, all of which passed in some form or version or another, although we share disappointment that the goals of divestment overture were changed in plenary.

Yet overall, GA was a delight. What a grand opportunity for Presbyterians to share passion about our work in the world! It is a blessing to be able to see friends, acquaintances and meet with PCUSA staff! Many thanks to GA staff who served to resource committees including our friends Ruth Farrell (Presbyterian Hunger Program), Rebecca Barnes (Environmental Ministries) and Nora Leccese (Office of Public Witness). The staff and many volunteers on the Committee on Local Arrangements worked very hard to set up this gathering and it is definitely noticed!

There were so many opportunities for gathering together seeking justice. We appreciated the chance to meet with Voices 4 Justice and for other gatherings such as the Presbyterian Peace Fellowship breakfast! I am so grateful for the work of Rick Ufford-Chase and others who have assembled a book Faithful  Resistance: Gospel Visons for the Church in a Time of Empire" Quoting from the back cover "14 contributing authors ...offer their ideas for ways to move the Christian church to a place of faithfulness in the midst of the empire. Rick adds his own observations about the compromised condition of our church institutions with concrete suggestions for bringing us home to the heart of the gospel." (I bought 8 copies to share!)

Certainly the Holy Spirit was among us as the body elected two exceptional women as co-moderators, Revs. Denise Anderson and Jan Edminston, as well as electing the Reverend J. Herbert Nelson as Stated Clerk of the PCUSA. His passion for both environmental and social justice has been prophetic  for Presbyterians for Earth Care as well as others and this denomination

Let us continue to work together, in faithful presence/resistance as we move forward as a body of Christ toward making this denomination one of major prophetic leadership as we seek justice, love kindness, and walk humbly with our God!

An ethic of earth care AND people care

Getting Out of the Corner 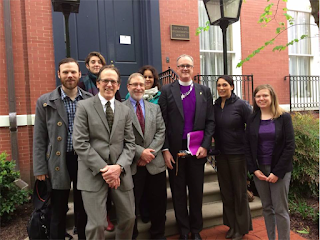 Recently Mark Lattime, Alaska bishop for the Episcopalian Church, invited me as Executive Presbyter of the Presbytery of Yukon to travel with him to Washington D.C.  Our purpose was to join with Christian advocates from five Christian agencies meeting with The White House Council on Environmental Quality.  The Council was exploring greater restrictions on oil drilling in the Arctic National Wildlife Refuge.  We were the Alaskans on the team, and we asked for a shift in the ethical and political conversation on the subject.

We Alaskans find ourselves trapped in a corner.  Our families, friends and neighbors are so economically dependent on oil that we find discussion about restricting oil development difficult.  Indeed, Alaska’s economy traps Alaska’s congressional delegation into fighting for development, no matter what.

This is true even though climate change is hitting Alaska faster and harder than any place else in the nation.  Alaskans may sound like science deniers, but really we are just trapped in a corner.  Alaska, and others (West Virginia coal miners?), really cannot deal with the level of change our country needs from us without help.

This is an issue we Christians need to speak out on.  Genesis 2 tells us that creation care and people care are of equal importance.  Choosing one ethical value over the other may fit partisan politics, but deep ethics—ethics inspired by the transforming power of God—holds both values together.

This is a time for deeper ethics rather than that of partisan politics.  We are in an important historical moment, so let us see it for what it is.  This is not a people versus nature moment.  This is the moment when God is reminding us that weare related to all of creation.  Loving our neighbor therefore means earth care and people care go hand-in-hand.

What will this look like politically?  This same issue caused the UN to form theGreen Climate Fund.  Surely, deep ethics can affect domestic policy, too.

On our part, Mark and I invited leaders from four other denominations to join us in this work.  Together, we are speaking to our churches and to power structures across the state about the importance of this moment, and the importance of effective policies informed by an ethic of earth care AND people care.  It is time to reframe the issue, so no one is fighting from a corner.
Posted by PresbyEarthCare Coordinator at 11:38 AM No comments:

Eco-Stewards meet in Seattle in June

The tide is rising and so are we… 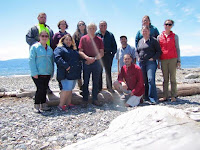 Last month participants from around the country gathered in Seattle to reflect on how to navigate the environmental issues of the Pacific Northwest with regards to climate change and within the context of Christian faith. Collectively our group of seven EcoStewards and four leaders examined Pope Francis’ encyclical, Laudato Si’, On Care for Our Common Home. We reflected upon these words on the shores of Lake Washington and Bellingham Bay, while connecting them to the actions of many of the people and organizations we visited. 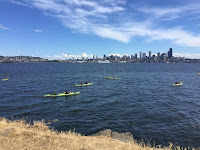 Folks at the Sightline Institute introduced us to the danger coal trains posed to many small towns as cargo loads brought the possibility of explosions, coal dust, and traffic issues rather than the promise of local jobs. EarthMinistry discussed their push to engage churches in these issues primarily teaching churches to act as allies to local Native American tribes. In the middle of the week, we met with the BackboneCampaign as they offered insight into the mass organization of kayak-ivists that worked to block oil ships from leaving port. And finally, the Lummi Nation graced us with their stories and wisdom as they shared the generations’ long fight for equality and their more recent move to prevent export facilities at Cherry Point. 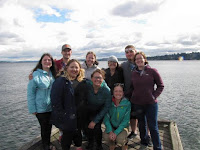 In all of these instances, words from the encyclical and deeper understandings from our faith tradition appeared as we navigated how to serve God while caring for creation and our fellow brothers and sisters. We contemplated this call while meeting with others, communally preparing and sharing meals, singing songs, worshiping together, exploring the city by public transit, and kayaking Puget Sound. Within this week we learned and grew from those around us, recognizing the impact we all have in our world and that it takes every bit of effort to make a difference. Based on Rabbi Shochana Meira Friedman’s song, which we collectively sang the last night in Seattle, “the world is ready and so are we.” 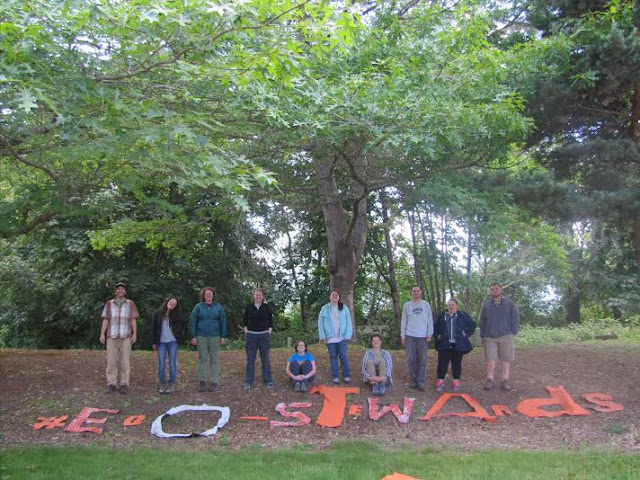