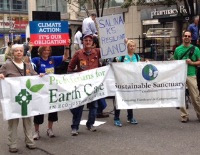 In 2014, six Midwesterners chartered a Trailways bus, headed for the People’s Climate March in New York City.  We soon had a busload, and walked with over 300,000 others, representing dozens of organizations.  Diane Waddell marched with Presbyterians for Earth Care and the Presbyterian Hunger Program, and I marched with Missouri’s Sierra Club.  Months later, when President Obama led America’s participation in the Paris Climate Accord, that arduous bus trip felt worthwhile.

Popular support for climate protection keeps growing.  Market leaders see wind and solar power, electric-powered transportation, and energy efficiency as good opportunities for cutting costs.  But actions by our federal, state, and local governments are crucial, and strong political forces cling to gas and oil’s dominance of our economy.

Grassroots support for energy reform is imperative. Presbyterian activists are helping by co-sponsoring meetings where technical experts educate a wider public.   But we of PEC must also show up in halls of governmental power, providing visible support for enlightened leaders who must flip the policy switches.  And we should wear PEC logos.  In 2014 the big March’s cultural diversity was visible in our tee-shirts and banners, and that diversity made our collective witness more robust.  Today, visibility of our PEC logo in those halls will likewise aid environmentalism’s work, and it will draw people who share our views and will support PEC’s witness.

PEC and our faith partners are essential strands in environmentalism’s defense of Earth's community, because we will broaden the persuasive reach of the coalition.  Being in touch with values and realities, we can be agents of reconciliation.

James R Turner is retired and lives in Kansas City, Missouri, where he serves as an Elder at Westport Presbyterian Church. He holds a BA in English, an MS in Accountancy, and a JD from the University of Missouri – Columbia.  In thirty years at Truman State University, Missouri’s public liberal arts university located in Kirksville, he taught business law, environmental studies, and accounting.  There he was Founding Secretary for Delta of Missouri Chapter, Phi Beta Kappa.  During 2006 – 2016 Jim was on Missouri Sierra Club’s Executive Committee, and its Chair for six years.

Posted by PresbyEarthCare Coordinator at 6:03 PM