The Sacredness of the Sea 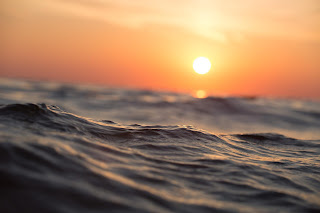 The Sacredness of the Sea

The sea is a sacred mystery. Covering over two-thirds of the Earth’s surface and holding over 1.3 billion cubic km of water, the ocean is the wildest, most expansive place on earth. As of December 2021, the most accurate and precise estimate of the deepest part of the ocean was 10,935 meters, roughly 6.79 miles down. To put this in context, Mt. Everest, one of the tallest mountains on earth, is 8,848 meters high. On average, the ocean is 2.3 miles deep— another alarming depth for many of us who have only waded out chest deep. Venture offshore by boat or plane, far from land, and you will get a sense of just how massive the ocean is, as every direction reveals a continuous horizon for miles to come. Whether you’re deep below its surface, in the middle of it, or simply on the shore looking out, within this space rests the mysteries of life yet to be explored and uncovered. There is a power that the sea evokes—a sacredness that asks us to stop and listen.

The expansiveness of the ocean often puts life in perspective bringing with it an awe, fear, and humility when you realize just how big the world is. In some cases, it’s the same astonishment that met Moses at the burning bush or on Mt. Sinai (Exodus 3)—the amazement of being in the presence of God. In other instances, it’s the gentle whisper Elijah heard in the midst of stillness after disaster—a reminder to listen and pay attention in the midst of despair (1 Kings 19). Still, feelings that arise with the sea may be comparable to the frustrations that accompanied the Israelites (Exodus 15) or the tribulations that met Jesus as each respectively wandered in their own wildernesses (Matthew 4). However God decides manifest, the experience is somehow magnified by such vast and powerful natural spaces.

It’s not just the setting that invokes God’s presence but the ocean itself has a message that highlights the intersectionality of our world and the justice we are called to pursue. With increased research, the sea is shouting to be heard—plastics polluting our water, fisheries being depleted, corals crying out like John in the wilderness about what is to come. The rapid warming of our oceans is a warning sign. According to NASA, 90% of global warming is occurring in these very waters. With warmer oceans, comes the thinning of ice shelves; sea level rise; coral bleaching; the loss of coastal protection, marine species, and ecosystems; threats to food security; increasing diseases; extreme weather events; and further pressure on coastal populations—nearly 40% of the world’s population.

Fifty years ago, in October 1972, Congress enacted the Marine Protection, Research and Sanctuaries Act (MPRSA), which prohibits unregulated dumping that would harm human and marine health. As people of faith, we know the term sanctuary—it’s a place of refuge, a safe haven, a shelter from the storm. Some of our churches may even be sanctuaries for those seeking asylum. Sanctuary can provide a glimmer of hope. The important recognition is that the same forces of climate change that are causing warming seas, sea level rise, coastal flooding, ocean acidity, and an overall strain on local resources are creating environmental refugees and pushing people toward seeking refuge. Such connections show that we do not exist in a bubble. Most of all there is a sense of wonder and reverence as the creation teaches us about our Creator and our call to love our neighbors—fellow humans as well as sea life and water. By caring for the ocean—as vast and unknown as it may be—we are caring for each other.

Dr. Vickie Machado is a third generation South Floridian and holds a PhD from the University of Florida, where she focused her studies on Religion & Nature and Religion in the Americas. She also serves as a leader for the Eco-Stewards Program, a creative community that shapes, inspires and connects young adult leaders (ages 20-30) through storytelling and place-based pilgrimages focused on faith and the environment.

Posted by PresbyEarthCare Coordinator at 11:10 AM