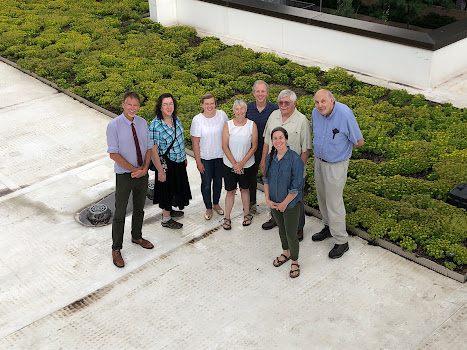 In 2006 the Presbyterian Church (USA) General Assembly adopted a policy urging all Presbyterians to “…take the results of our energy consumption seriously, to pray asking for God’s forgiveness and guidance, to reduce energy consumption, and to calculate carbon emissions and offset their negative impact.”

Two Minnesota Presbyterians churches have fully embraced this call to action and offer a shining example of how faith and determination can lead to big changes in a church’s carbon footprint.

At Westminster Church, located in downtown Minneapolis, discussion of carbon neutrality began in 2011, when the church was planning a new addition. Carbon neutrality occurs when emissions of carbon dioxide, in this case by a church building, are offset by its removal (often through carbon offsetting), or by eliminating emissions.

“Carbon neutrality is probably the most important aspect of environmental justice these days,” says Jeff Hill, a member of Westminster’s Eco-Justice Ministry Team.

Oak Grove Presbyterian Church in Bloomington, Minnesota began having the same discussions in 2013. “We came up with a long-range plan to sequester as much carbon as we could either through what we do with our building and grounds, or through our investments,” says John Crampton, part of the church’s Green Committee.

Both churches began to make changes most casual church-goers wouldn’t notice, but that made a big difference in their carbon footprint.

“We cut our energy by a third just by converting to LED lights,” says Crampton. “We got rooftop solar that generates 20 kilowatts, and a membership in a community solar garden that provides about 50 kilowatts. In addition we get 100 kilowatts from wind power, so we actually produce more renewable electricity than we consume.”

Oak Grove also targets emissions produced by people driving to church. “We've sponsored annual EV expos at our church,” says Crampton. The expos have drawn people from throughout the community, where they learn about the personal and environmental benefits of electric vehicles and bikes.

Oak Grove served as a model and inspiration for Westminster’s efforts. Westminster Church also looked at how their efforts towards sustainability could inspire and serve the wider community.

“Westminster is a large downtown congregation,” says Sandy Wolfe Wood, Chair of the church’s Eco-Justice Ministry Team. “We draw from all over the twin cities, so we have the opportunity to become advocates as people start taking what they've learned at church and enacting it in their different communities. We would also love to take the extra energy we generate and and provide some of it to our local non-profits.”

Oak Grove has also challenged its members to take sustainability home with them, asking them to take a family carbon pledge to cut their carbon footprint with small actions like using LED lights, driving less, and eating a more sustainable diet.

For congregations who fear going carbon neutral might be expensive, Hill says Westminster has actually found they’ve saved some money. “We obtained partial ownership of a solar garden that will actually pay us back over time. Every year electric rates are going up, but our rates are fixed.”

“The 20 kilowatts of solar that we have on Oak Grove’s rooftop will pay for themselves in 18 years,” adds Crampton. “They have a life of 30 years, so that's 12 years of free electricity from those panels.”

But for Wood, the main reason to go carbon neutral isn’t about money. “If in a church you can’t lead with a moral imperative,” she says, “where can you do it?”

For environmental activists in other churches wanting to create a carbon neutral plan, Crampton suggests getting other church committees involved. “Get their ideas,” he says. “ Our mission committee actually paid for the two level-two electric vehicle chargers we’ve installed.”

Westminster and Oak Grove are two of ten churches in the Presbytery of the Twin Cities Area that are certified Earth Care Congregations. Rick Person, another member of the Eco-Justice Ministry Team at Westminster encourages other churches to get certified in this Presbyterian Church (USA) program. “As soon as you start certification, you’re going to be involved in improving your facilities carbon footprint as part of the program.”

Eric Diekhans is a fiction writer, a video producer with the Greater Chicago Broadcast Ministries, and Editor of Earth News. He is a member of Lake View Presbyterian Church in Chicago.

Posted by PresbyEarthCare Coordinator at 11:43 AM