How to Feed a Multitude (During a Pandemic)
By Jonathan Lee

As the Executive Director of Loaves & Fishes New Haven, the largest food pantry in the New Haven, Connecticut area, James Cramer has a unique relationship with food. On a given Saturday, you can usually find James running around as he coordinates forty to fifty volunteers moving approximately 10,000 pounds of fresh produce, canned goods, and other donated food to get ready for their weekly food deliveries or grocery pickup events.

When he first arrived at Loaves & Fishes New Haven after receiving his Master of Divinity from Yale Divinity School, the organization was only serving about 280 to 300 families per week. With only one other employee to help with the week-to-week logistics, James had to lean on a network of dependable volunteers to manage and grow this program. Things changed when the Covid-19 pandemic hit, and the number of people in the city needing food services ballooned drastically. By the summer of 2020, what started as an operation feeding 300 families once a week was now delivering prepackaged bags to 700 families, and welcoming another 500 to its usual grocery pickup sessions. 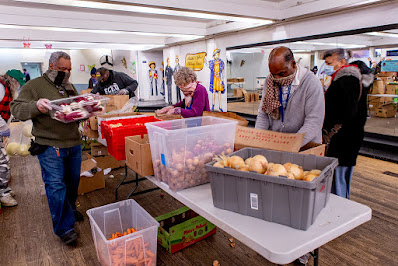 Loaves and Fishes New Haven was not able to meet this increased need alone. “When the pandemic started,” James recalls, “we said, ‘Let’s do this. Let’s lean in and jump with both feet first.’ So we created a delivery program from scratch with three other organizations that was reaching 1,200 families a week.”

Rather than haphazardly tackling problems as they appeared, the team of organizations focused on their strengths to make the most impact on their community. “My big focus has been on partnership and figuring out who is really good at what. We partnered with the United Way for example. They found all the drivers, and we found all the food: a perfect marriage. Those are the things we’ve been embarking on more and more this past year.”

Before the pandemic, Loaves and Fishes New Haven did not have the extensive network of partnerships it does now. While they were partnering with service providers who used their space, the organization’s once-a-week pick-up model meant they weren’t engaging with specific populations. But as the pandemic put more limitations on people’s ability to get food, James began getting calls and reaching out to others to help address those growing needs. Loaves and Fishes New Haven now works with the Office of Veterans Affairs, Warren Street Deliveries, and the New Haven Board of Alders to get food out to specific populations of the New Haven community which they did not previously have access to. “It’s like the stepping out in faith,” James says. “We’re letting the work lead and the money to follow. If someone comes to us, we’re going to say ‘yes’ and we’ll figure out how to say ‘yes’ and the community will support us in saying ‘yes’ to them. Every time we’ve said ‘yes’ to somebody, there’s been a donor who said, ‘I want to say yes to that too.’ That’s been empowering in terms of knowing how much folks can support us.”

With the support and empowerment of his community, James can focus on doing what’s important: finding food. “I’m really good at getting food and getting people to pack that food. It’s kind of hodgepodge, but that’s the fun part for me. It’s a big puzzle!” And there are certainly a lot of pieces that James needs to track. Loaves and Fishes New Haven receives food through relationships with local producers, grocery stores and universities, and also buys food from distributors or food banks using federal subsidies and grant money.

Having access to all these different food streams, Loaves and Fishes does their best to source good, fresh food for their families. “We keep a pretty close finger to the pulse of what folks want to eat. We really try to mirror what you and I would get a bag of groceries for. There will be canned goods, some rice and pasta, some meat, but also lots of fresh fruits and vegetables”

Working in such close proximity with different food providers and distributers has given James a unique look into our food system. “The more I’ve worked there, the more I realized how complicated it is,” James says. “The way food trickles down is pretty inefficient. We’re paying farmers to plant things that there wouldn’t be a market for without the federal subsidy program, and then moving that food from food banks to food pantries and then people take it out.”

This complicated pathway from field to plate isn’t just inefficient, but also has environmental repercussions given how much greenhouse gases are emitted as the food is in transit. James is also trying to tackle food stigma, and hopes to break down assumptions about food by encouraging volunteers to take untaken food at the end of a work day. “The other end of radical hospitality is not just giving people everything, but also taking what you’re willing to give them,” James explains. “If you’re not willing to be a part of that, you’re not in community with them. You’re signaling you’re on a different level. It’s just food. God created that food for us to enjoy. Food is food”

What’s one piece of advice James has for anyone who wants to work with a food pantry? “Talk to them about their specific needs,” James says. He explains that while canned food drives do have a place, those events only add to the system’s inefficiencies. A well-run food pantry has much more purchasing power than you or I, and so donating money directly to the food pantry will have a more long-lasting effect than donating food. “Build relationships with organizations that you trust and are transparent with their money,” James recommends. “If you find someone you can trust, you are good to go.” 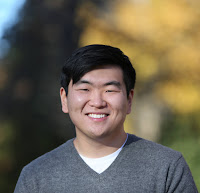 Jonathan Lee is a second year Master of Divinity student at Yale Divinity School. He is currently serving as Presbyterians for Earth Care’s Programming and Learning Fellow.
Posted by PresbyEarthCare Coordinator at 4:35 PM