Devotional for Fifth Sunday of Lent

by Sook and Don Choi

Those who go out weeping, bearing the seed for sowing, shall come home with shouts of joy, carrying their sheaves. (Psalm 126:6, NRSV)

“Why do you still want to study us? We have no more culture here,” responded the Manobos to Fr. Albert Alejo, S.J., an anthropologist wanting to study them. They lived in Mount Apo area in Mindanao, the southernmost part of the Philippines, where a 250 megawatt geothermal power plant was planned. Much conflict left the Manobos “apathetic and without a will to survive.” Without their ancestral land, they felt “inferior, embarrassed as hunters at not being able to catch their prey in the disturbed forest, awkward at having to borrow old gongs in order to dance, pain of being fired from jobs for lack of adequate skills, shame at being scolded by nurses in municipal clinics and in being accused of having sold their souls to the ‘development aggressor.’”

Similar struggles happen in Indonesia and elsewhere, too. Some argue that modernization and globalization are the way for everybody to prosper. Others want to preserve their way of life, together with a basic livelihood. Accommodating all has proven elusive, resulting in winners and losers.

Christ proclaimed God’s realm, with no losers – how strange! As strange as today’s passage. All those who go out shall come home! None will be missing! That they weep as they go out shows life is rife with risk and danger. That they shout with joy as they come home tells us that most grounding assurance: peace. That they go out with seeds and return carrying sheaves shows mankind finally in harmony with nature.

How is this possible? By the cross of Christ. It means different things to winners and losers. For all it is the way to God’s realm.

Indeed, the Manobos eventually “organized themselves to credibly prove their rights to” and reclaim their ancestral domain through recalling and celebrating their tribe’s spirit, reviving their cultural traditions and acting determinedly as one people.

Prayer: God of life, your ways are perfect and life-giving to all, while our ways are imperfect and generate winners and losers. Help me see the other as you see me. Help us see your ways as real options for us – that our times of fasting may turn into celebrations of life together. Amen. 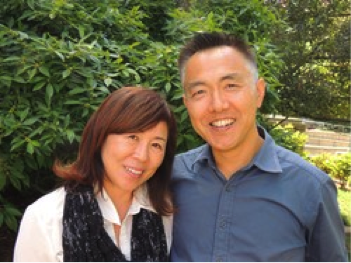 Sook and Don Choi have served as Mission Co-Workers in Indonesia since 2014. They are serving at the invitation of the Duta Wacana Christian University in the city of Yogyakarta, in partnership with the Communion of Churches of Indonesia (PGI). Sook teaches Art and English. As an adviser to the president, Don helps build international networks to strengthen the school’s growing graduate program.
Posted by PresbyEarthCare Coordinator at 7:35 AM