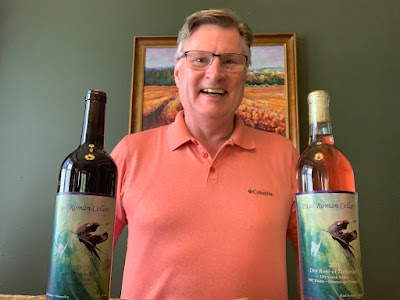 “I thought 2021 was going to be all about coping with scarcity, instead it positively changed my engagement with, and my approach to, my vineyard, with unexpectedly positive results.” – Paul Slaikeu

Paul Slaikeu is the Vice-Moderator of the Presbytery of the Redwoods and an award-winning home winemaker in California’s Sonoma County. His home in Healdsburg, CA is surrounded by larger commercial vineyards and winery tasting rooms, but his annual 20-24 case output supplies not only his family and friends, but his home church with their communion wine.

“Living in wine country, one of the small but noticeable sacrifices during COVID has been our shift from serving both wine and grape juice by intinction during the Lord’s Supper,” admits Rev. Mary Beene, pastor at Windsor Presbyterian Church. Paul’s wine, often served with homemade bread, was a highlight of the service, truly demonstrating God’s goodness in the fruit of the vine. “We could joke that Paul didn’t save the good wine for last, waiting for Jesus to turn water into wine,” says Beene. “Paul performed that miracle twice a month by sharing his bounty with us.”

But it is not really a miracle. It is hard work that turns nearly 500 gallons of water a week during growing season into beautiful grapes that can be fermented into great wines. In 2014, he even won a Gold Medal for his Zinfandel.

Paul planted his 116 vines on a steeply sloped yard next to his home. Always a connoisseur of fine wines, Paul had turned his husband Martin into a wine-lover on a wine club trip after their third date. Through the years, they had enjoyed exploring how to pair wines with food and unabashedly call themselves “foodies” who love to experiment with great pairings.

When they moved to Healdsburg in 2005, Martin went back to school to become a wine professional. Since harvest and winemaking season keeps him busy at work, he mostly consults while Paul does the heavy lifting of caring for the vines, harvesting, and making the wine. Paul planted his first vines in 2008 and made his first wine in 2011.

This past year, however, was different than previous years. Healdsburg and much of the western United States faced a serious drought situation. Commercial vineyards often have older vines that can withstand severe drought; they actually use less water than many other agricultural uses. Even so, many lost vines and grapes as water supplies dried out.

Very little rain fell during the traditional rainy season, which was completely dry from November 2020 to April 2021. By season’s end, Lake Mendicino, which supplies much of Healdsburg’s water had no more water than before the rainy season started. Through the long summer it only got worse, as the lake levels fell so much that towns flooded to form the lake decades before were suddenly visible again on the cracked, dry bottom.

Healdsburg placed a severe limit on all water uses inside and outside homes. The drought threatened not only agriculture, but homes, as the previous year’s fires had raged in the drought-stricken hills around Healdsburg. So the city of Healdsburg got serious about limiting water usage. They worked out a special program for residents to use recycled, non-potable wastewater in a bid to teach conservation in an area where drought is likely to become more common.

Another Healdsburg resident from the Windsor Church told Paul about the program that would provide up to 500 gallons of wastewater per week for residents. The city provided the transportation for free if residents could provide storage containers. Paul started calculating and found that his drip system for the vines used 116 gallons per hour for several hours per week, estimating about 500 gallons total. He jumped into motion, signing up for the program, securing first 250 gallons of storage and then a 500-gallon tank and a small electric pump to ensure the system worked.

His first goal was to just keep the vines alive through a draught-stricken summer, prioritizing the health of the vines over producing grapes. He cut back on watering to once per week, watering only the grapes and some fruit trees on the property and allowing the other ornamental landscaping to survive if it could without water.

As grapes started to appear, he pruned nearly half the clusters, allowing only one bunch at most per branch, rather than a typical two or more. He paid more attention close to harvest time to make sure the vines were surviving the dry, hot summer and fall. The dry year did bring some benefits, as he had fewer problems with disease and powdery mildew. And he found one more very unexpected benefit.

In pruning so carefully and paying more attention throughout the year to the vines, the grapes were superb. Because he was in the vineyard almost every day, they were picked at the most ideal time. When Paul and Martin tasted the wine after the grapes’ primary fermentation, Martin told him that this year would be the best wine he had ever made.

Paul admitted, “I thought 2021 was going to be all about coping with scarcity, instead it positively changed my engagement with, and my approach to my vineyard, with unexpectedly positive results.”

Although he made only 11 cases versus the usual 20-24 cases, he is very pleased with the year’s production. “When there’s a constraint, a limitation, it really makes me pay attention. I could have always been doing this; I could have had better vintages all along.”

Paul also noticed that this happened with electrical usage in past years as well. “I never paid attention to my electricity until I got solar panels and started monitoring it.” This year’s drought and Healdsburg’s water conservation programs made him more mindful of his water use, not only in the vineyard, but in the house, as well. “I bought a Flume water monitor and we now take shorter showers and flush the toilet less, because we found out that we can.”

He lost only a few ornamental plants in his other landscaping, despite not watering there at all. It turns out that when he told his landscaper to put in draught tolerant plants, he could trust that they were truly well xeriscaped. He says he may never water that part of the yard again. These kinds of permanent changes can make a real difference in the community as we learn to live in greater harmony with God’s creation. 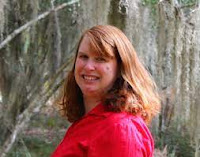 Rev. Mary Beene is pastor of Windsor Presbyterian Church in Windsor, CA. Mary grew up near Detroit, attended high school in Pennsylvania, majored in environmental science and German at Allegheny College, served in the Peace Corps in Hungary, earned a Masters in Public Administration at American University in Washington DC and worked for over 12 years for environmental non-profits in DC and Boston with an emphasis on board training and fundraising.
Posted by PresbyEarthCare Coordinator at 7:06 PM