A Model for Adult Education

The Doctrine of Discovery:
An Introductory Model for Adult Education
by Nancy Corson Carter

The Doctrine of Discovery—never heard of it? That’s true for many of us. But in three sessions in January 2018, Adult Education at the Church of Reconciliation in Chapel Hill, North Carolina provided an opportunity to learn about it.

Initiated by a series of papal bulls written in the 15th century, essentially the Doctrine of Discovery was the Church in Europe saying to the exploring Nations of Europe, “whatever land you find that is not ruled by Christian Rulers, those people are less than human and the land is yours for the taking.” 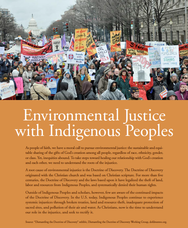 The Doctrine of Discovery allowed European Nations to colonize Africa and enslave the African people. It allowed Columbus and other European “discoverers” to find a “New World” inhabited by millions and claim it for their countries.

The Doctrine of Discovery is a systemically racist doctrine that still operates in our legal system as well as in our dominant social values. Important dates marking its inclusion in our law and some of its recent usages are:

The 19th and 20th century Indian Boarding Schools represent one of the strongest influences of the Doctrine of Discovery in the US.  Presbyterians as well as other denominations were actively involved. The schools’ philosophy was “save the man; kill the Indian.” Thousands of native children were forced to attend these and be assimilated, mostly into the bottom of the socio-economic ladder—as farm laborers or domestics.  Though there were positive results of training these children to fit into the “white world,” sexual, physical and emotional abuse as well as death and suicide were not uncommon.

Now PC(USA) is joining a growing list of denominations repudiating the Doctrine of Discovery, developing recommendations of how Presbyterian  congregations “can support Native Americans in ongoing efforts for sovereignty & fundamental human rights.”

For basic understanding of the Doctrine of Discovery, we divided the following film into two parts, one for each of the first 2 weeks:

1) “Dismantling the Doctrine of Discovery: A movement of Anabaptist people of faith”  (43 minutes)

Then for the last week we focused on the idea of Apology (using our second film):

2) To learn of PC(USA) efforts to atone for mistakes in involvement in the 19th and 20th century Indian Schools, institutions that intended to serve Native Americans by stripping away their culture and making them assimilate to “white life,” see the introductory 15 minute film that we used for our discussion:

In that last week we also discussed Repentance and Action. Materials from Creation Justice Ministries were very helpful. We presented the Jemez Principles as an outgrowth of study to use inclusive process in any group work; we invited local Native Americans to be a part of all of our discussions; we are working on putting up a plaque in our church to honor the various tribes who were on the land before us; and we are alert to local and national issues that involve the Doctrine.

For further information contact Nancy Corson Carter nccarter@nc.rr.com or Sue Regier sregier@mindspring.com, leaders of the presentations. The series was informed by their work with Presbyterians for Earth Care’s national conference at Menucha Conference Center in the Columbia River Gorge in Oregon in September 2017.

Posted by PresbyEarthCare Coordinator at 6:35 PM