This spring, Presbyterians for Earth Care became a member of the Utah Wilderness Coalition (UWC) www.protectwildutah.org, to join the national movement to protect 8.2 million acres of outstanding public lands in Utah as wilderness. Wilderness areas are important for spiritual renewal and remind us to practice humility in our relationship with God’s creation. Wild areas give glory to God in especially powerful ways. Why do the wild lands in Utah need help from groups like PEC throughout the country? Just a few of the reasons include:

-Spectacular wilderness quality lands managed by the Bureau of Land Management (BLM), many of which that surround National Parks like Canyonlands, Arches and Capitol Reef are unprotected and threatened by off-road vehicle use, oil and gas leasing, harmful ‘vegetation treatments” that increase cattle forage, and more.
- These lands belong to all Americans, not just Utahans.
-Utah’s members of Congress are notoriously anti-conservation and pro-extraction, even though the majority of Utahans favor protecting their public lands.
-There is a strong movement in Utah to put more federal lands under state control which would translate into poor management that favors extractive uses.

In early August, the Bureau of Land announced that it will NOT offer oil and gas leases on 87,000 acres of public wildlands in Utah’s red rock country.  This includes parcels of land near Arches, Canyonlands, and Capitol Reef National Parks, and Bears Ears National Monument, as well as parcels located on lands proposed for wilderness in America’s Red Rock Wilderness Act.  This is a significant victory, and it is clearly in response to public outcry!

To thank your Senator(s) and/or Representative(s), you can use this link.  Feel free to personalize the message. THANK YOUS really help elected folks to feel good about what they did, and encourages them to do more of the same!

As a reminder about how egregious this sale would have been, here is a map of the 87,000 acres that were originally proposed for lease: 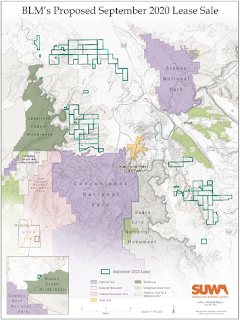 Demand Congressional Oversight of BLM’s Vegetation Removal Program
The BLM is casting aside public and independent scientific scrutiny of massive vegetation clear cuts across the Interior West. Under the guise of watershed or habitat enhancement up to 10,000 acres of Pinion-Juniper forests can be turned to mulch using chaining and bull hog masticators.  SUWA provided a webinar on this issue that you can view here Contact your Member of Congress and demand Congressional oversight on the devastating Bureau of Land Management practice of vegetation removal: wildutah.info/VGFB! Learn how Trump’s rollbacks of the National Environmental Policy Act have help to expand the BLM vegetation removal program here: https://suwa.org/wild-utah-podcast-episode-16-defanging-nepa/

It is important to get visibility in the media for this critical, underreported issue.  If you willing to write a letter to the editor, here are  Messaging Points. Send your draft to dave@suwa.org or terri@suwa.org and they will review it for accuracy.

Ask Your Members of Congress to Cosponsor America’s Red Rock Wilderness Act, or Thank them for Doing So

Even more important will be encouraging newly elected members to cosponsor in 2021 after the bill has been reintroduced.

Join the Utah Wilderness Coalition as a Congregation – Congregations and faith organizations are welcome to become members of the Utah Wilderness Coalition. There is no expense involved and your involvement as a faith community helps underline the vital moral and spiritual dimension of protecting public lands. Fill out the form at www.protectwildutah.org and an organizer will follow up with you.

Posted by PresbyEarthCare Coordinator at 4:55 PM