From the Land and for the Land


“It really boils down to this: that all life is interrelated: we are all caught in an inescapable network of mutuality, tied into a single garment of destiny. Whatever affects one directly, affects all indirectly.”
--Dr. Martin Luther King, Jr.

Did you know that there are over a billion species of organisms in a teaspoon of healthy soil?  With both of his parents involved in public health fields, Dennis Testerman has always made the earth-health connections that are now becoming de rigueur in scientific circles. 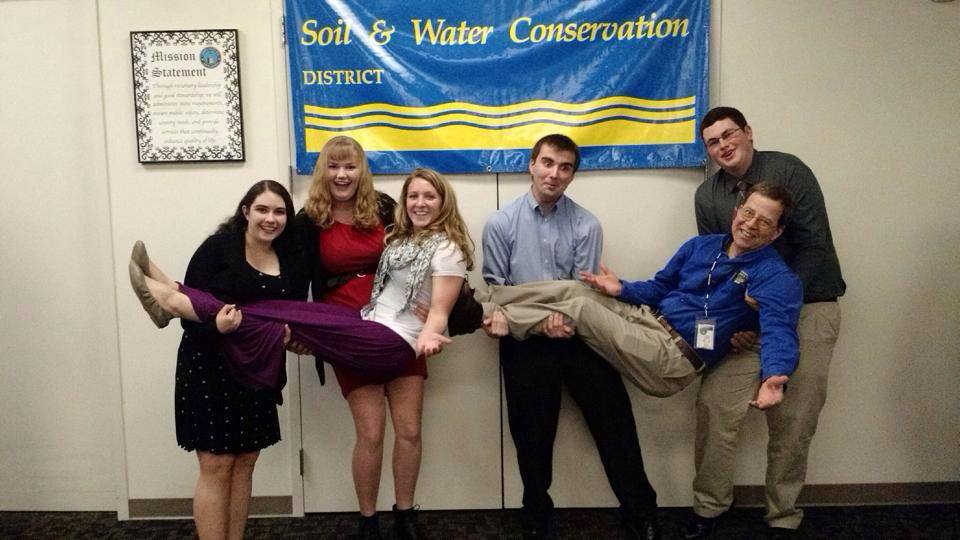 Dennis, in blue, with friends from the Soil and Water Conservation District

Working on the task force that prepared the PC(U.S.A.) policy statement Restoring Creation for Ecology and Justice, adopted by the 202nd General Assembly in 1990 “energized me about as much as anything I had done,” Dennis enthuses.  Which is a little hard to believe given everything he has done before and since. His work on that document even meant that he was involved in the earliest PEC conferences, when we were known as Presbyterians for Restoring Creation.

Dennis’ great-great-great grandfather was a Presbyterian minister on the frontier in Virginia.  He is the first generation in his family born off the Southern Appalachian mountain cove farm that has been in his mother’s family since 1789, and he spent a lot of time on that farm as he grew up. The connection between faith and environment for him was not a theoretical proposition, but a lived experience.

“An old growth forest on our farm inspired me to major in forestry in college,” he shares.  He then made the connection between conservation and world hunger first in college and then during a two-year agricultural assignment in Nigeria with Church World Services.  Going to Nigeria was his first trip overseas and his first trip on a plane; the experience was so formative that he and his wife took another agricultural assignment in Pakistan after seminary.  He was specifically ordained as a public servant in environmental stewardship.  Dennis’ global mission work was what brought him to the table for the drafting ofRestoring Creation for Ecology and Justice.

Dennis does not share some peoples’ view that science and religion are mutually exclusive: “Science is a God-given way of understanding the Creation and ways for everyone to be the best stewards possible.”  He lives that out in his work in North Carolina with both the Cabarrus County Soil & Water Conservation District and as Stewardship of Creation Enabler for the Presbytery of Charlotte.  His work with the conservation district brings him in contact with farmers, homeowners, businesses, students, planners, developers – often all in the same day.  The district “encourages the informed and responsible stewardship of the land and all its natural resources: soil, water, animals, plants, air and energy.  He encourages us to be aware of and work with the over 3000 conservation districts across the country.

When asked about how congregations can be more involved in environmental issues, he goes to Deuteronomy: “Taste and see that the Lord is good.”  He suggests doing things that put you out in nature: birding, gardening, hiking, photographing.  People involved in our natural world see “the ability of the Lord to meet human needs, not human greed.”  We are encouraged to enjoy the beauty of creation, but not destroy it.

Rev. Mary Beene serves on the EARTH team and coordinates the M.K. Pentecost Ecology Fund for the Savannah Presbytery.
Posted by PresbyEarthCare Coordinator at 8:42 PM