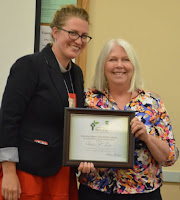 The William Gibson Eco-Justice Award was presented to Rev. Dr. Patricia K. Tull, who is A. B. Rhodes Professor Emerita of Old Testament, Louisville Presbyterian Seminary, Program Director for Hoosier Interfaith Power and Light, and author of “Inhabiting Eden: Christians, the Bible, and the Ecological Crisis.” Dr. Tull is a GreenFaith Fellow, frequent speaker, and workshop leader. William E. Gibson was a PEC founding member, author and eco-justice advocate and this award is named in his memory.

The Alliance for International Reforestation (AIR) is the winner

of the Restoring Creation Award. AIR was founded at First Presbyterian in Deland, Florida in 1992 with the mission, “to implement sustainable farming methods for poor farmers in Central America in order to protect water sources, reduce hunger and malnutrition while protecting the gift of creation.” Since then, AIR’s team has planted more than 4.2 million trees in Guatemala and Nicaragua, trained 3,000 families in sustainable farming, built over 800 efficient stoves, and started dozens of micro-businesses. Anne Hallum is the Founding President. 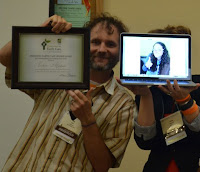 Presbyterians for Earth Care (PEC) presented a new award this year to a young adult who has outstanding leadership potential for eco-justice. The first Emerging Earth Care Leader Award went to Vickie Machado. Vickie serves on the Leadership Team of the Eco-Stewards Program and served as a young adult leader in the Catholic Worker House in Gainesville. She also fought fracking as an organizer for Food & Water Watch Florida and was selected to participate in the Archdiocese of Miami’s Young Adult Papal Visit to Cuba.

PEC Steering Committee members and volunteers also staffed a booth in the General Assembly Exhibit Hall at the Oregon Convention Center that expanded on our water theme. At the booth was a water cooler that was sometimes empty and served as a bulletin board for posting messages about the upcoming crisis regarding drinking water shortages, droughts and floods. Visitors could take the bottled water quiz, sign the bottled water pledge, and pick out a scripture about water for reflection during the day. 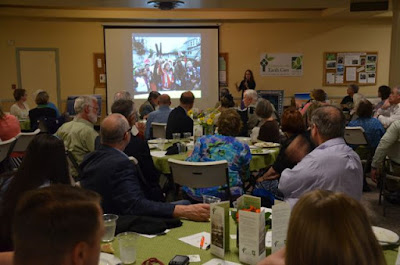 One hundred people attended the Luncheon and hundreds of people came through the Exhibit Hall and had the opportunity to learn how PEC supports people of faith working towards “environmental wholeness with social justice."

Posted by PresbyEarthCare Coordinator at 10:44 AM